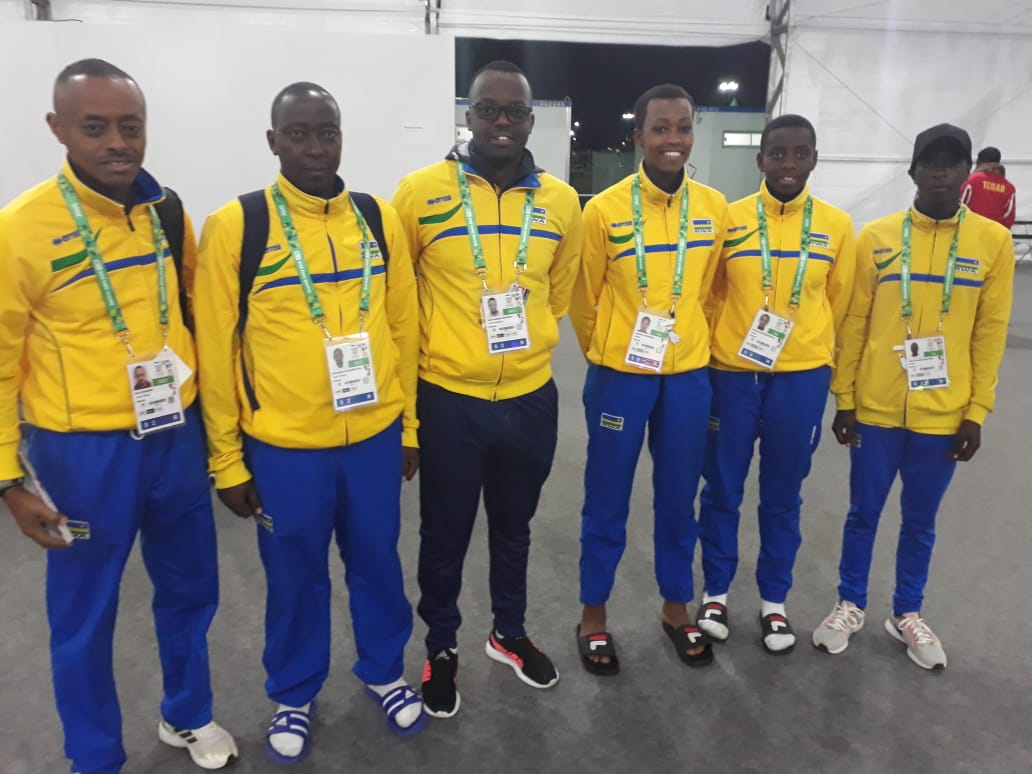 The Rwandan athletes participating in the Summer Youth Olympic Games (YOG) arrived in Buenos Aires, Argentina on October 4 to a warm welcome from organisers and volunteers. The YOG is scheduled to take place in Buenos Aires from October 6-18, 2018.

Rwanda will compete in beach volleyball and athletics. The delegation is composed of Beach Volleyball pair of Valentine Munezero and Penelope Musabyimana and 3000m athlete Aimé Phraditte Bakunzi.

Athletes coach Eric Karasira told KT Sports, “We have arrived safely in Buenos Aires. We are going to use these remaining days to acclimatize and hold final training sessions waiting for the final event to start on Saturday,”

“We have good and well prepared athletes in both athletics and beach volleyball. So we believe in them to stage triumphant performances,” added Karasira.

Before departure, Bakunzi, 17, who will be making his third appearance on international scene in Argentina following his maiden outing to Africa Schools Championships in Morocco in May and the African Youth Games held in Algeria in July from where he qualified for the Youth Olympics says he is targeting to win a medal in Argentina.

“I am aware it is going to be a tough call against the world’s best, but I am ready for the challenge,” Bakunzi told local media.

The beach volleyball pair of Munezero and Musabyimana secured the ticket to Youth Olympics from this year’s Africa Youth Games in Algeria after finishing second, behind champions Mozambique.

Rwanda has taken part in two previous YOG event held in 2010 and 2014 in Nanjing, China. At the inaugural 2010 Youth Olympic Games held in Singapore, Rwanda was represented four athletes, all returning without any medal.

Potien Ntawuyirushintege finished eighth in the 3000m final clocking 8:14.59 while his counterpart Jacqueline Murekatete was disqualified in the 3000m girls category.

In boxing, Matusi Haziza failed to go past the preliminary round, losing to Zohidjon Hoorboyev from Uzbekistan in the light flyweight (48kg) category.

In swimming, Marie Claudine Iradukunda failed to progress past the preliminary round of the girls 50m freestyle event.

At the YOG in 2014, Rwanda was again represented in athletics, swimming, beach volleyball and women’s cycling.

In women’s cycling, Clementine Niyonsaba and Benintha Uwamariya took part in the tripartite commission but didn’t earn any honours.

In swimming, Rwanda qualified one swimmer in Abdoul Gatete Babu. Babu was disqualified in the 50m freestyle heat stage before finishing 45th in the 50m butterfly after clocking 34:44.

The YOG is an elite multi-sport international event held every four years for the world’s best athletes between the ages of 14 to 18. Buenos Aires 2018 will mark the first time an Olympic event has had an equal number of women and men athletes. There will be 1,999 women and 1,999 men from 206 countries and territories competing in 32 sports for a total of 1,250 medals.

In addition, this is the first time the event has been held in a city in the Americas.

Ethiopian PM pushes for unity after months of ethnic violence