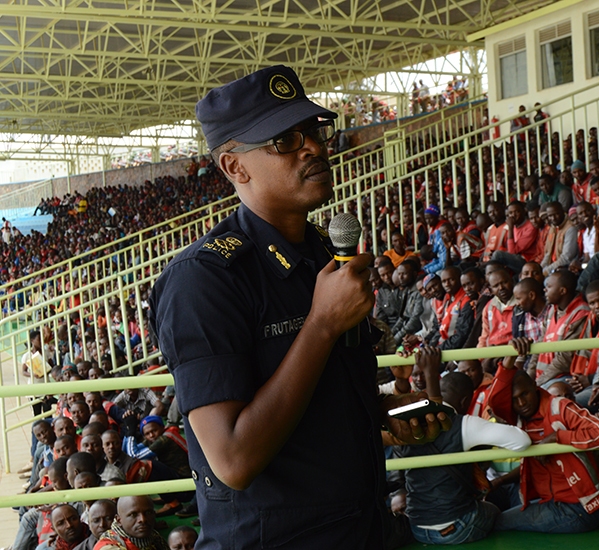 The road safety campaign aimed at averting accidents continued yesterday across the country with a focus on commercial motorcyclists, one of the leading causes of accidents.

The awareness campaign was conducted simultaneously in all 30 districts of the country  and  seeks to reach over 55, 000 motorcyclists in the country.

In the City of Kigali, which has more than 13,000 motorcyclists, the Regional Police Commander-Central, Assistant Commissioner of Police Felly Rutagerura Bahizi, said that although motorcyclists contribute to the country’s development, their conduct on roads continue to raise security concerns.

“Your trade provides fast transport; you pay taxes and support your families, but at times you put lives in danger due to recklessness. Respect traffic signposts, don’t ride if you don’t have a driver’s permit, overtake when you are very sure that it’s safe and overtake from the right side,” Bahizi said.

He was referring to a footage taken with CCTV cameras, which was played to the motorcyclists, showing their reckless maneuvres, speeding, violating  right of way for pedestrians and vehicles.

Accidents caused by motorcyclists accounted for 18.5 per cent of the total accidents registered last year.

Motorcyclists also account for 30 per cent of the total accidents registered last month.

“The majority accidents are caused by failure to respect traffic rules and road safety signs. Don’t use a phone when you are riding, and stop especially where signposts require you to do so because when you continue you are likely to cause an accident,” the RPC said.

He called for partnership against their errand colleagues, who also facilitate or commit other crimes like theft and drug trafficking.

Meanwhile, Bahizi also hinted on the issue of motorcyclists’ security personnel, who confiscate documents such as driver’s license of their members, saying that “that’s the duty of Police.”

Elsewhere, the Governor of the Eastern Province, Fred Mufurukye, while addressing hundreds of motorcyclists in Bugesera District, also cautioned them against lawlessness, including theft and trafficking of illicit drugs.

He urged them to be defined by values of hygiene, discipline and to partner with security organs to fight crime.

In Northern Province, Governor Jean Marie Vianney Gatabazi, while addressing about 600 motorcyclists in Musanze District, said that accidents can be a bottleneck to development.

He further hinted on the issue of child pregnancies with motorcyclists being some of the people responsible.

Meanwhile, Solomon Bigirimana, the acting president of FERWACOTAMO, the federation of commercial motorcycle operators in Rwanda, said that the federation is being revamped to address the longstanding issues faced by their members, but also to blacklist errant members.

“In few weeks, you will be applying and collecting transport authorisation permit from RURA individually, not your cooperatives like it is; all security personnel will be trained to know their limits, and they will all get uniform,” Bigirimana said.

“However, as we try to address the challenges that you are facing, we are also taking measures against those involved in crime; anyone that will be caught in theft and snatching people’s belongings, trafficking narcotic drugs or collaborating with criminals will be expelled and blacklisted from motorcycle transport business,” he added.