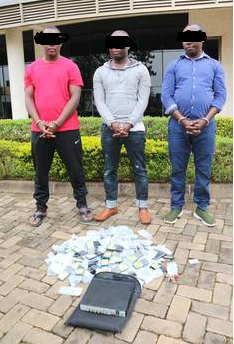 Rwanda National Police, on Sunday, paraded three men said to be behind a spate of burglaries in the City of Kigali. The suspects, all men, are said to be behind the theft of about 70 mobile phones and a CCTV server when they allegedly broke into two shops at night in the central business district, recently.

Police spokesperson, Commissioner of Police Theos Badege, said that one of the suspects was arrested in Gatsata Sector of Gasabo District while two others were intercepted in Musanze District en route to Rubavu District, allegedly to connect with a potential buyer from Goma in Democratic Republic of Congo.

The suspects were immediately handed over to Rwanda Investigation Bureau for further investigations.

“These suspects duplicated keys to the targeted shops where these electronics were stolen,” Badege said.

“The arrest should send a warning that in one way or another you will be arrested to face the wrath of the law and be made to pay for what you stole or destroyed,” he warned.

Badege also commended the growing role of the general public in crime detection, prevention, and arrest of lawbreakers.

“These people were arrested because of the credible information sharing from the public, we value and count on their continued community policing role,” he said.

Meanwhile, the suspects admitted to the crime while speaking to journalists.

One of them, a car mechanic, said he started stealing two years ago.

“Before I started stealing I was a car mechanic in Gatsata, I have not gained anything from stealing apart from being arrested…now I am going to prison for something I should have avoided,” said the suspect (name withheld).

According to the suspects, two of them would steal electronics while the other was charged with looking for buyers.

Under article 300 of the penal code, any person who commits theft without violence or threat shall be liable to a term of imprisonment of six months to two years and a fine of between two to five times the value of the stolen property or one of these penalties.