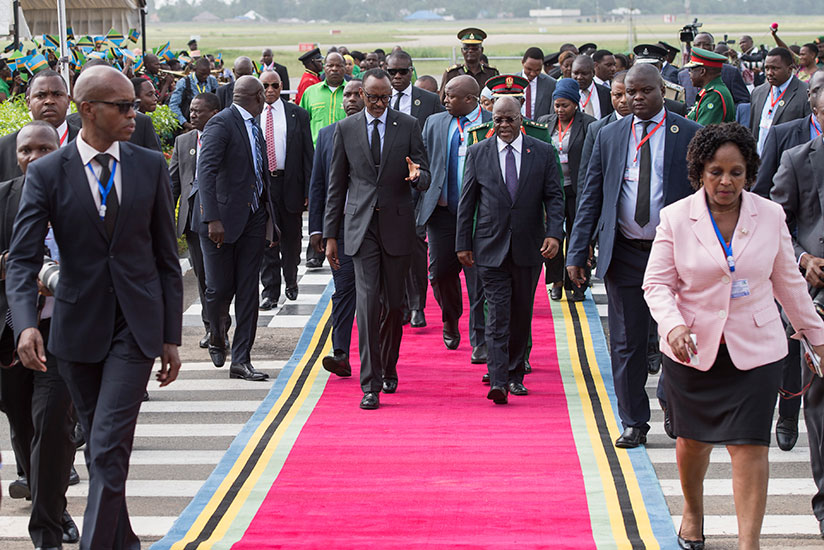 Rwanda and Tanzania have agreed on joint construction of a Standard Gauge Railway (SGR) from Isaka (northwestern Tanzania) to Kigali, a move which will facilitate movement of goods between the two countries.

The agreement was reached following a meeting between President Paul Kagame and his Tanzanian counterpart John Pombe Magufuli, during the former’s one-day working visit to Dar-es-Salaam, yesterday.

President Magufuli said that they have instructed the Infrastructure ministers of the two countries to meet in the coming week to deliberate on an agreeable financing model.

“We have agreed to start the construction of the Standard Gauge Railway line from Isaka to Kigali. We have instructed the Infrastructure ministers from the two countries to meet within the next two weeks to start planning the implementation of the project. We want the construction to start immediately because the feasibility studies and designs are complete,” Magufuli said.

The meeting between the ministers will, among other aspects, consider the financing models of the project before a tender announcement for the project is issued.

Magufuli said that they expected to break ground for the project within this year.

The railway line is expected to link Dar-es-Salaam and Kigali via Isaka, and expected to improve movement of goods into and out of the country considering that over 60 per cent of Rwanda’s imports and exports go through Tanzania.

Studies conducted by the East African Community (EAC) indicate that the Tanzanian railway route would cost Rwanda about US$800 to $900 million.

The Standard Gauge Railway from the port of Mombasa via Uganda is expected to cost Rwanda close to US$1 billion, initial studies had shown.

Rwanda has maintained that the country intends to implement both routes (via Tanzania and Kenya) to increase efficiency and reduce cost of transport of goods.

Meanwhile, Magufuli, in a post meeting media briefing, said that Tanzania commits to support President Kagame as he takes over the African Union Chairmanship.

“We will support him as the chairperson of the African Union. We are glad as we know his capabilities. I have assured him that Tanzania and our friends will support him during his term as the AU chair as he tries to improve the welfare of citizens,” Magufuli said.

President Kagame said that, as he takes on the position of AU chairperson, he is well aware of long- standing challenges, such as unemployment, among African youths.

To tackle this, he said, countries ought to work together to develop business and investments, which will translate into job opportunities for Africa’s young people.

“It also involves individual countries fulfilling their responsibilities as well as young people being innovative and ambitious. As government, we need to give them education, skills and provide a conducive environment for them to be able to do what they can,” Kagame said.

Food rations for refugees in Rwanda are reduced amidst funding shortfalls