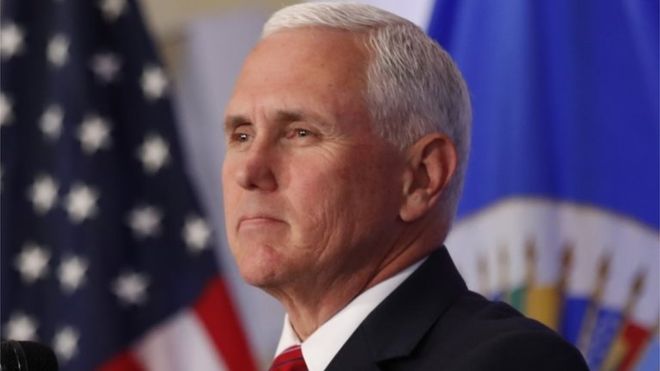 A senior North Korean official has accused US Vice-President Mike Pence of being “stupid” and warned of possible “nuclear showdown” if diplomacy fails. Choe Son-hui said Pyongyang would not “beg the US for dialogue” nor try to persuade them to attend talks.

In recent days, both sides have warned that the 12 June Trump-Kim meeting could be delayed or even called off.

Pyongyang said it would reconsider going if the US insisted on it giving up nuclear weapons unilaterally.

US President Donald Trump on Tuesday said that it was the North that had to meet the conditions for the talks to go ahead.

Choe Son-hui has been involved in several diplomatic interactions with the US over the past decade.

In an article carried by state news agency KCNA, she said Mr Pence had made “unbridled and impudent remarks” in the media in recent days, including his comments that North Korea “may end like Libya”.

She called him a “political dummy” for comparing North Korea “a nuclear weapon state, to Libya that had simply installed a few items of equipment and fiddled around with them”.

“As a person involved in US affairs, I cannot suppress my surprise at such ignorant and stupid remarks gushing from the mouth of the US Vice President,” she said.

Ms Choe said Pyongyang was “not begging for talks” and warned: “Whether the US will meet us at a meeting room or encounter us at nuclear-to-nuclear showdown is entirely dependent upon the decision and behaviour of the United States.”

That led to North Korea’s vice-foreign minister threatening to pull out of the Trump-Kim summit.