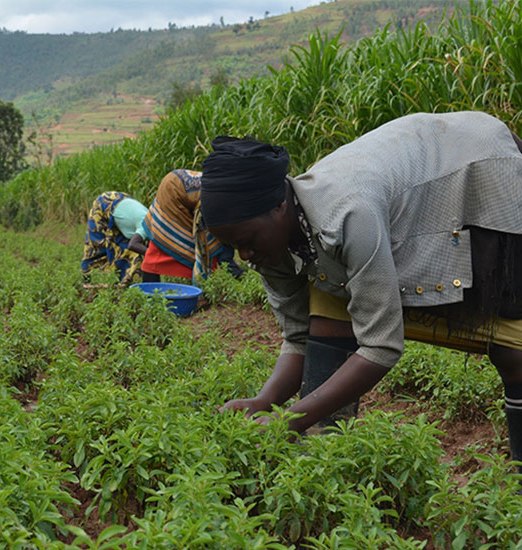 In January 2015, a Canadian firm, SteviaLife Ltd, acquired licence to grow the rare stevia plant on 1,000 hectares following an agreement signed between the company and the Government of Rwanda.

Under the agreement, the plan was to set up a stevia crude extraction plant, worth $3 million, by mid-2016, and build a $10 million plant to process refined stevia for export by 2018.

The processing plant was supposed to be set up when the firm had acquired between 2,000 and 5,000 hectares of stevia plantations in Rwanda.

The land on which the plant was to be grown would be acquired through the company working closely with the population, by showing them the benefit of growing the plant.

Exports of products from stevia crude extract factory, alone, would rake in $140 million per year.

But three years down the road, the processing plant is not yet established while the area on which stevia is grown is estimated at 200 hectares, according to Bruce Irambona, the Managing Director of Stevialife Sweeteners Ltd which has taken over the project.

The new firm, which has taken over the project from SteviaLife Ltd, has investors from Canada and UK, with headquarters in Canada.

According to the National Agriculture Exports Development Board (NAEB), which represented government interests in the deal, the former investor faced financial constraints which affected the expansion programme, thereby necessitating seeking a new investor.

Stevia is a natural sweetener for food and drinks, with no calories, but which is up to 300 times sweeter than sugar in the same concentration.

Stevia plantations in Rwanda are currently in Rulindo, Nyanza, Kirehe, Nyaruguru and Bugesera districts, according to NAEB.

Speaking about the importance of the factory, Jean Marie Vianney Munyaneza, from the Diversification and Products Development Division, NAEB, told The New Times that it will add value to stevia leaves and the country will fetch the premium price that leads to high return (almost 10 times than selling leaves) in terms of foreign currency.

Secondly, it will create more than 100 permanent jobs locally, he said.

Thirdly, Munyaneza added, the local food and beverage manufacturers will have an opportunity to use stevia as a sweetener to replace sugar for health benefits to consumers.

Irambona said a kilogramme of dried stevia leaves at export market goes for between $2.2 and $3 (Rwf1,800 and Rwf2,500) depending on the quality, while a kilogramme of pure stevia crude extract fetches about $200 (some Rwf160,000).

Speaking to The New Times, Irambona, who also happened to have managed the previous project, SteviaLife Ltd, failed to mobilise the necessary resources and had to pass on the project on a new company.

“The factory requires at least 1,000 ha. Together with investors, we are still identifying the suitable land for stevia crop. Almost 350 ha of land is currently available for stevia,” Munyaneza said pointing out that the factory will have capacity to process 3,500 to 4,500 metric tonnes per year.

Talking about some of the new input brought in by SteviaLife Sweeteners, Irambona said that it has put in more efforts in giving farmers technical assistance on stevia crop, noting that the company has about 300 permanent workers employed in various activities, including farm management.

“At Rulindo site which covers over 70 hectares [of stevia plantation], SteviaLife Sweeteners has installed irrigation system, which cost over Rwf100 million, to address the effects of drought on stevia leave production,” he said.

Munyaneza observed that there is an ongoing initiative to introduce stevia in Ruhango district as well. Another 200 hectares were identified in Bugesera (Rurambi marshland) and planting activities are underway to increase the area under production.

According to NAEB, a stevia farmer can harvest about six tonnes per hectare per year, and currently, Stevialife Sweeteners Ltd is paying farmers Rwf900 a kilogramme of dried stevia leaves.

Irambona said that there are 200 hectares available for planting stevia this year, and they will expand it next year. He said they expect to get some 600 hectares.

Currently, about 70 hectares of stevia plantation is available in Rulindo District, where 500 residents are employed, according to Rulindo District Mayor Emmanuel Kayiranga.

Kayiranga told The New Times that the 70 hectares consist land that the district leased to the investor to grow the sweet crop. During this financial year 2017/2018, he said, stevia will be grown on an additional 20 hectares of land owned by Rulindo District residents– Buyoga Sector.

The mayor said that SteviaLife Sweeteners is preparing seedlings to distribute to farmers for cultivation, and negotiations are ongoing on how much the investor will be paying a farmer per a kilogramme of the sweet leaves.

The move, he said, intends to see how the residents can tap into the economic benefits of the crop.

“The residents were working in the Stevia [investor]’s plantations; but we realised that it is not enough, and we resolved that they should also grow the crop on their land and the investor will be buying from them,” he said, explaining that the move would help farmers earn more income and contribute to increasing the acreage of stevia plantation.

Officials expressed optimism that the growing of the crop will gain momentum thanks to mobilising farmers to cultivate this new crop whose benefits some people were not aware of, and that there are companies that are engaged in its cultivation.

For the construction of the factory, Irambona said it will be considered after mobilising needed plantations to ensure there is enough produce for mass processing.

“What we are focusing on is mobilisation so that farmland for the crop expands, as the small yield produced continues to be exported,” he said.

Meanwhile, Irambona said that there are small stevia crude extract processing units for about 100 hectares of stevia crop which are being designed in Europe, and the company is ready to use such new technologies once they are approved for effectiveness, “so that we can have the first of such unit here in Rwanda.”