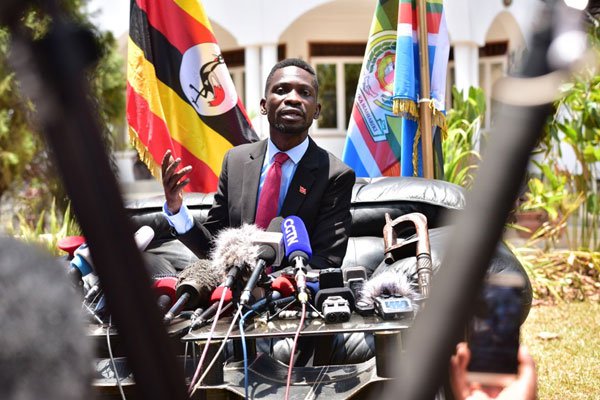 He described as speculation the raging debate that he could be laying strategies for a 2021 presidential bid, saying such a conversation is “premature.”

Mr Kyagulanyi instead clarified that he and his colleagues in the democratic struggle will first build cohesion and emancipate Ugandans from political slavery before they announce the next course of action.

“When I was in the ghetto, my colleagues asked me to be the ghetto president. Some people have now started asking about whether I will contest for presidency or not. I do not want to speak about presidency for now if we have not built cohesion among ourselves,” Mr Kyagulanyi said.

The MP was responding to a host of questions from journalists who asked him to clarify whether he would contest for the presidency in 2021 during a press conference at his home in Magere, Wakiso District.

Mr Kyagulanyi did not commit whether he would be the one to contest for presidency at a later time, or one of his colleagues in the struggle, even when pressed hard by the journalists.

Clad in a black suit and a red dotted necktie and a sky blue shirt, the youthful legislator also clarified that People Power, his pressure group, is not a political party but an ideology which is espoused by Ugandans who feel they are pressed against the wall and need redemption.

He noted that he and his colleagues do not want to get exposed to the regime because it is desperate to break down their struggle which they envisage to restore democracy and rule of law.

Without mentioning names, Mr Kyagulanyi claimed that some people had approached him and his colleagues to register People Power as a political party, but he declined.

“I strongly believe that anybody can structure themselves if they are organised and regain their liberty. Ugandans must know that this is not a Bobi Wine struggle but that of the whole country and that is why we are inspiring hope among those who feel pressed that we have the power to gain our freedom,” he said.

Mr Kyagulanyi returned from the US last week where he had gone for specialised treatment following the clashes that erupted in Arua District during the Municipality’s by-election last month that left him and his other colleagues in pain, and his driver, Yasiin Kawuma dead.
However, he did not reveal the details of the hospital which he checked in, saying he chose to keep it confidential on the advice of his doctors.
“Tests were carried out and I was treated, but I must state that my [health] is not yet stable,” Mr Kyagulanyi said.

The clashes have since attracted criticism both locally and globally, with majority of people accusing government of using torture to silence the Opposition.

At the same press conference, Mr Kyagulanyi told President Museveni to free Ugandans from bondage, just like the biblical King Pharaoh of Egypt let free the Israelites to the Promised Land.

He also wondered how Mr Museveni could praise his army for handling the clashes in the Arua Municipality by-election yet they are to blame for the Arua fracas.

“I want you [Mr Museveni] to know that there is time when you are in power, and there will be time when you are out of power. You should therefore treat people the way you want to be treated when you leave power,” Mr Kyagulanyi said.

Mr Wanyama argued that if Mr Museveni was a dictator, Mr Kyagulanyi would not have risen on the political card of anti-government to reach where he is now.

“His remark needs to be dismissed with the contempt it deserves, and Bobi Wine should know that the decision whether Mr Museveni stays is made by Ugandans and not any other person,” he said.

On safety
The legislator said he was not safe either because people had allegedly warned him to take care of his life.

Mr Kyagulanyi also lashed out at critics who claim he is a sell-out to the West, saying Ugandans are part of an international community.

He also reminded his critics that his is a genuine and indigenous struggle for liberty, not any other sinister motive.

“We long one day to sit on a global table as a conscious and credible nation and that is why we relate with the international community. But it is disturbing for the regime to call me a sell-out to the West,” he said.