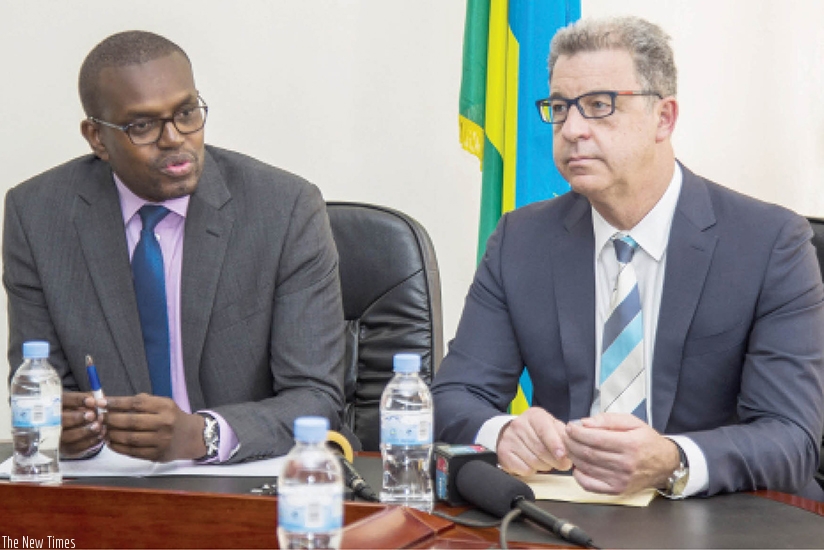 The Chief Prosecutor of the Mechanism for International Criminal Tribunals (MICT), Dr  Serge Brammertz, has said that his office was scaling up efforts in tracking the key suspects of the 1994 Genocide against the Tutsi, that remain at large 24 years later.

The top three fugitives that remain the subject of MICT – which took over from the International Criminal Tribunal for Rwanda (ICTR) include Félicien Kabuga, Protais Mpiranya and Augustin Bizimana.

Kabuga, a former businessman, is known to have been one of the key finaciers of the Genocide, Mpiranya was the commander of the notorious Presidential Guards, while Bizimana was the Minister of Defence during the Genocide

Giving updates on the tracking process at a news conference held at the Prosecutor-General’s office in Kigali on Tuesday, Brammertz said that they have re-activated a number of tracking teams.

“We have put a number of strategies in place. We are working very hard. I agree with you that we have failed so far to get the main fugitives arrested. This is a reality and this despite the fact that a number of persons have full time worked hard to try to identify the places where they are hiding,” he said.

“I’m obviously getting involved some of my colleagues who worked with me on hunting fugitives in the former Yugoslavia, […] it is a fact that we had the privilege of closing the ICTY with no fugitives at large. It was also very difficult that many years later we had Radovan KaradÅ¾ić and Ratko Mladić arrested after being on the run for 15 and 17 years,” he added.

The UN prosecutor says that there are lessons learnt and a couple of months ago they started putting a new strategy in place with modern technologies in terms of search with an increased cooperation with partners.

“It is extremely difficult because those are individuals with different identities having been successful in hiding for many years with obviously a support network which is still out there,” he added.

Brammertz also touched on the early release of Genocide convicts by MICT.

“My office two years ago asked for a rule change in this regard. It is still under consideration by the judges and I think that at least someone who is released before conpleting their sentence should be given specific conditions such as not to be a Genocide denier or someone who glorifies the crimes committed,” he said.

Of the 90 persons indicted by the International Criminal Tribunal for Rwanda (ICTR), eight  remain at large.

Brammertz noted that the tracking was still in the hands of the MICT, adding that it will remain operational for many years to come, but if it fails to get those remaining fugitives, it is something that will be on the table to see whether the cases can be transferred to Rwanda since they have limited finances.

“It will be a failure of the international justice if at the end of the day we are not able to get the remaining fugitives. This is our priority for the next years to come, but if we fail, we have to look at a way to transfer those cases as well,” he noted.

Rwanda’s Prosecutor General Jean Bosco Mutangana said that 18 Genocide suspects  were transferred to Rwanda for trial while 21 cases are being tried in other countries around the world, especially in Europe.

The Mechanism’s Office of the Prosecutor has a tracking team that is responsible for gathering intelligence on the whereabouts and activities of Genocide fugitives and providing support to national law enforcement authorities in arresting them.