China’s multi-nuke hypersonic missile, that can strike ANYWHERE in the world, will be ready ‘within a few months’ 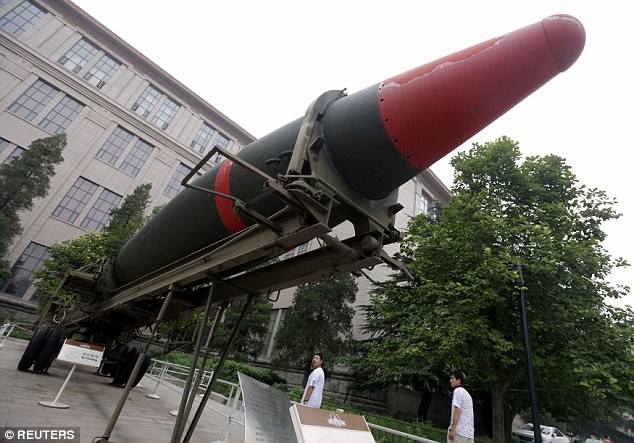 China’s next-generation intercontinental ballistic missile that could strike anywhere in the world with nuclear warheads is expected to be ready during the first half of next year. Dongfeng-41 missile, which is said to have the longest range of any ballistic rockets in the world, has undergone its eighth test and is now near completion, according to state-run media.

Previous reports have claimed that the missile has a range of at least 7,500 miles (12,000km) and could carry up to 10 nuclear warheads.

The new missile also has a speed of more than Mach 10 (7,672mph) and can use decoy devices to find it way through the enemy’s missile defence systems.

The warhead will be inducted by the People’s Liberation Army (PLA) in 2018 after first being introduced in 2012, the report from China’s state-run Global Times says.

‘It can carry up to 10 nuclear warheads, each of which can target separately,’ Xu Guangyu, a senior adviser of the China Arms Control and Disarmament Association told Global Times.

The missile must have ‘matured considerably’ if it is to be operational in 2018, Mr Guangyu said.

‘Once the Dongfeng-41 goes into service, China’s ability to protect its own safety and to prevent wars would greatly increase’, he said.

State-run media claim tests took place in its Western desert area but the exact location has not been revealed.

In July, a propaganda video from China claimed that Beijing owns about 2,500 ballistic missiles.

In the video, Dongfeng-41 is highlighted as one of the ‘world’s top five intercontinental missiles’.

The same video, however, also said that other countries shouldn’t be afraid of China’s ‘advanced artillery force’ because Beijing wouldn’t deploy the weapons unless it’s provoked.

It started by explaining why China needs powerful weapons by drawing comparisons to animals living in the wild.

The anchor said: ‘What would happen if tigers have no fangs and lions have no paws? The probably end up living with no food or even killed.

The video also claimed that China was the first country in the world to use tubular artillery.

The video then started listing some of the most powerful weapons Beijing has.

The country is said to have around 68 submarines, one home-made aircraft carrier, and the impressive J-20 stealth fighter.

In addition, the J-20 fighter jet is equipped with ‘cutting-edge supersonic and stealth technologies’, according to the video.

Some suggested that the aircraft was built in part from plans of US war planes, obtained by Chinese hackers jailed earlier last year. However, Beijing firmly denied the claims.

Military analysts said it was too early to tell if the jet matches the capabilities of America’s F-22, which was thought to be the original model.

The report said Beijing has 270 nuclear warheads as of July 2017.