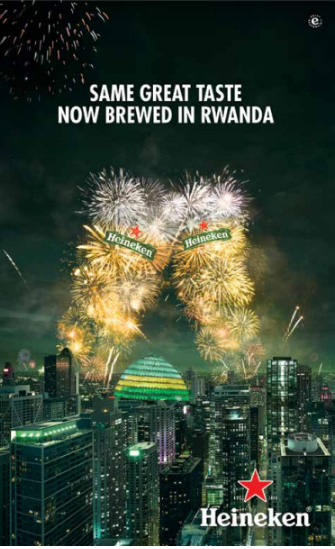 Following the milestone of making Rwanda only the 9th country in Africa to be awarded the licence to produce and sell Heineken locally, Bralirwa Plc officially launched another exciting Heineken campaign, fittingly named “Visions”.

The campaign portrays Rwanda as being part of the global stage, through the inclusion of the Kigali Convention Centre Dome in their Vision of a Global City.

“This new Visions campaign, with the fireworks over KCC dome, represents the celebration of Rwanda joining Heineken’s vision of a global community, with Rwanda playing a key role in this vision, following the milestone of being awarded the licence to produce Heineken locally,” said Bralirwa’s Marketing Director, Peter Karadjov.

He added that they have rolled out the campaign countrywide, on all media channels and with posters in every cabaret, so that every Rwandan feels the pride of seeing the country on the global stage.

“We made a significant increase in its investment, in order to be awarded this licence, including the instalment of a new HORAP tank, in order to ensure that “Heineken will now taste as fresh as you were drinking from Amsterdam”, said Sander Bokelman, Bralirwa’s Supply Chain Director.

As Rwanda will no longer have to wait 3 months for Heineken to be imported from Amsterdam, losing its freshness along the way and without the importation costs, Sander proves it will now be more affordable to Rwandan consumers at RWF 800.

Consumers have heralded this move, as it makes Heineken more accessible with the new price. Danny Uzankiza, a consumer who attended the Heineken Made in Rwanda launch event said “We had fun, enjoyed the high quality drink brewed in Rwanda for free. This replicates a company valuing its customers.”

Bralirwa Plc is a Rwandan company producing and selling beers and soft drinks. The Company’s beer brand portfolio includes Primus, Mützig, Legend, Amstel, Turbo King and Heineken all proudly produced in the Gisenyi brewery; the Company’s largest selling beer brand has been available to consumers since 1959.

Since 1974, the Company has been producing and selling soft drink brands under a licensing agreement with The Coca-Cola Company.

The Company was founded in 1957 with the construction of a brewery located in Gisenyi. Since 1971, Bralirwa Plc is a subsidiary of the Heineken Group, which holds 75% of the shares of Bralirwa Plc.