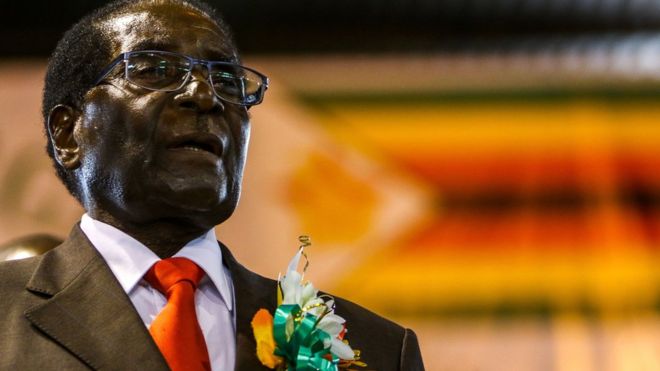 Zimbabwe’s parliament has summoned former President Robert Mugabe to give evidence about a claim he made about huge-scale diamond theft. Mr Mugabe accused foreign mining firms of “swindling” and “smuggling” in an interview on state-run TV in 2016.

“The companies have virtually robbed us of our wealth,” he said, adding that the treasury had seen little of about $15bn (£11bn) they had earned.

It is not clear if the 94-year-old will agree to appear before the committee.

He was forced to resign last December in the wake of a military takeover, and still has the privileges of a former head of state.

Meanwhile, the UK has said it would “strongly support” Zimbabwe’s return to the Commonwealth group of nations, following talks in London between UK Foreign Secretary Boris Johnson and his Zimbabwean counterpart Sibusiso Moyo.

Gen Moyo is the man who announced the military takeover in November, which led to Mr Mugabe’s resignation.

Although Mr Johnson said that Zimbabwe still had to ensure that this year’s elections were free and fair, his statement was condemned by opposition politician David Coltart, who said he was “appalled”.

Zimbabwe left the Commonwealth in 2003 after it was criticised for human rights abuses under Mr Mugabe.

Will Mr Mugabe appear before parliament?

During his last decade in office, several companies, including the army, police and a Chinese state company, were given vast tracts of concessions to mine diamonds at the rich Marange fields in the east of the country.

He said the committee had resolved to invite the former president “to explain the disappearance of the $15bn worth of diamonds”.

“We have set 9 May as the date on which he will give evidence.”

However, last month Mr Mugabe said he was not clear where the figure of $15bn had come from.

“I was given that by some officials, that figure had been circulating around, but really it was not confirmed,” he told the privately-owned Zimbabwe Independent.

If Mr Mugabe does appear before the committee, it would be his first public appearance since his resignation.

Reports followed of large-scale killings by Zimbabwe’s security forces to stop the smuggling, prompting Marange diamonds to be banned in 2009.

A Panorama investigation found in 2011 that in the Marange fields, the police and military recruited civilians to illegally dig for diamonds for them.

In 2012 a campaign group said at least $2bn worth of diamonds had been stolen from the Marange fields. Partnership Africa Canada (PAC) said the “theft” had enriched Zimbabwean officials, international gem dealers and criminals.