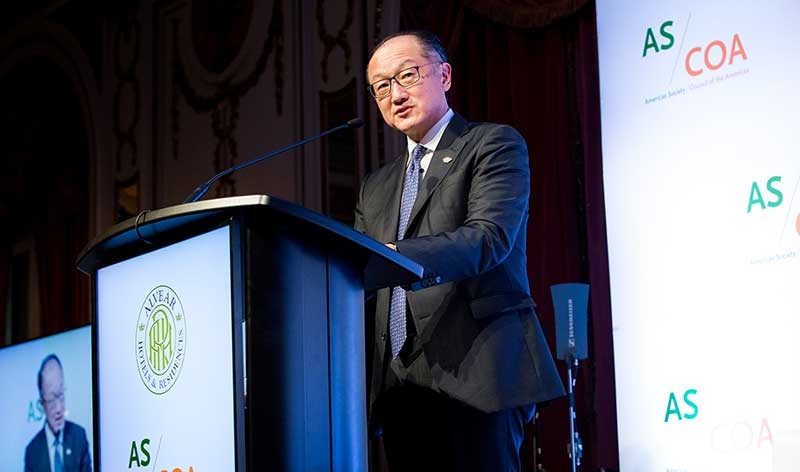 World Bank President Jim Yong Kim unexpectedly announced his resignation on Monday, setting up a potential dispute between the U.S. and other member countries over selecting the next leader of the world’s largest development-finance institution.

Mr. Kim plans to leave the bank on Feb. 1, nearly three years before his term was set to expire, to join a firm focused on infrastructure investments.

He first became president of the World Bank in 2012, appointed by President Obama, and in 2016 he was appointed to a new term lasting through 2021, meaning his successor wouldn’t have been appointed during the first term of the Trump presidency.

Mr. Kim, 59 years old, said in an email to bank staff that his “opportunity to join the private sector was unexpected, but I’ve concluded that this is the path through which I will be able to make the largest impact on major global issues like climate change and the infrastructure deficit in emerging markets.”

He had previously been president of Dartmouth College, and before that was a physician known for his work combating HIV/AIDS. He will also rejoin Partners in Health, an international community health-care organization that he co-founded more than 30 years ago.

The World Bank said that details about the infrastructure fund that Mr. Kim is joining would be released at a later date.

In the bank’s seven-decade history, its president has always been picked by the U.S., but it isn’t guaranteed that Washington will get to make the new selection. Many countries and advocacy groups have sought an end to Washington’s control, and the prospect of President Trump making the selection could galvanize countries to fight for a change in this status quo.

“To have strong, good governance that is a globally representative, it shouldn’t be one country dominating the decision on leadership,” said Nadia Daar, the head of the Washington office for Oxfam International, a global relief and development organization. “The world is changing economically and politically and the institution really needs to modernize in that way as well,” she said.

“Jim Kim’s selection was controversial, mostly because much of the world was no longer satisfied with a pre-ordained arrangement where an American headed the bank and a European headed the International Monetary Fund,” said Scott Morris, a senior fellow at the Center for Global Development.

The U.S. Treasury Department, however, takes the lead on issues with the World Bank, and would likely be the agency on the front lines of any fight to appoint his successor.

A Treasury representative said in a statement: “We appreciate Mr. Kim’s service to the World Bank,” adding that Treasury Secretary Steven Mnuchin “looks forward to working with his fellow governors in selecting a new lead.”

The Treasury is the largest shareholder at the World Bank, controlling about 16% of voting shares. It has had a sometimes-antagonistic relationship with the bank under Mr. Mnuchin. The Treasury has criticized the World Bank for lending too much to China and for compensation packages that it says are too generous.

But this past April, the Treasury backed a $13 billion funding increase for the World Bank. Securing the funding was a major victory for Mr. Kim’s legacy at the bank, especially when the Trump administration has been so critical of many international organizations.

“He secured a capital increase at a time that few would have thought it was possible,” said Mr. Morris, who had been the Treasury appointee responsible for development finance under Mr. Obama.

During his tenure, Mr. Kim also achieved two replenishments of funding for the International Development Association, the fund at the World Bank earmarked to support the world’s poorest countries.

Mr. Kim’s tenure wasn’t without controversy. He presided over a reorganization of the bankthat drew some objections from both inside and outside the bank.

Mr. Kim had been credited for hiring a top economist, Paul Romer, to lead the bank’s economics department. But Mr. Romer shocked the bank last year by resigning and alleging that the bank’s scientific integrity was compromised.

Mr. Romer, in particular, apologized to the country of Chile saying that it had been unfairly harmed by methodology changes used to calculate the bank’s flagship report on business competitiveness.

A bank review concluded that there had been no intent to manipulate World Bank reports for political purposes, but the bank also agreed to change the way it ranked countries’ business competitiveness, and the episode was a black eye for the institution.

RDB registers over US$ 2 billion worth investments in 2018