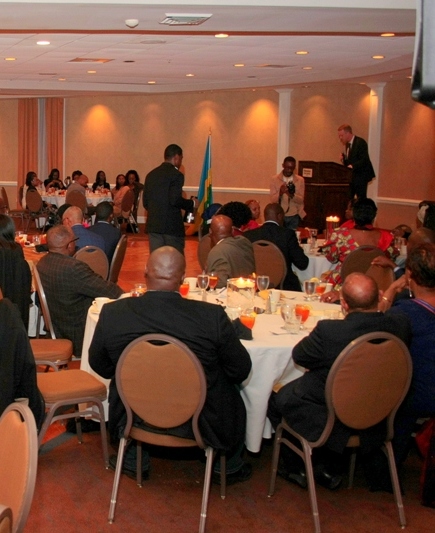 On February 10, 2018, the 16th Annual Rwanda Prayer Banquet convened at the Sheraton Hotel in Silver Spring, Maryland. The event brought together Friends of Rwanda and Rwandan Diaspora from Washington DC, Maryland and Virginia, including various states of USA, and Canada. This year’s theme came from Psalms 33:11–12 “The counsel of the Lord stands forever. Blessed is the nation whose God is the Lord, the people whom He has chosen for His own inheritance”.

For sixteen years, the Rwanda Prayer Banquet-USA has maintained its mission to “Rededicate” the Nation of Rwanda to the Almighty God, to pray for its Leaders, its people, and promote unity, faith, and love in the spirit of our Lord Jesus Christ.

The banquet featured several speakers beginning with Eric Munyemana, Africa Continental Director of the All Africa Purpose Purpose Driven/PEACE PLAN Initiative. He also serves as a Board member of Rwanda Leaders Fellowship, and Board Director of Rwanda Prayer Banquet USA who shared the role of churches in Rwanda. Munyemana introduced the delegation of Rwandan businessmen, and clergy who had also travelled from Kigali to attend the event. During his brief remarks, he challenged community leaders from across the US to organize similar prayer banquets in their respective states.

The event’s guest VIP speaker was Peter Greer, who serves as the President and CEO of HOPE International, a global Christ-centered microenterprise development organization serving throughout Africa, Asia, Latin America, and Eastern Europe. In addition, he has co-authored 10 books, including Mission Drift, The Giver and the Gift, and Created to Flourish.

Opening his speech, Greer impressed the audience while telling several jokes in Kinyarwanda, before switching back to English. Greer spoke about our loyalty to the groups we identify with such as Team Rayon Sports, but encouraged the audience to unite as Team Jesus. He shared stories from Hope Intl’s work in Rwanda, and stressed the importance of communities coming together to build each other up.

H.E. Ambassador Mukantabana thanked the congregants for dedicating Rwanda in the hands of God and prayed for unity, peace, prosperity and political stability of Rwanda. She then asked the community leaders who were representing different communities from across the US to come forward, so that one of the pastors could pray a blessing over each of them.

Antoinette Kanyabutembo who founded the Rwanda Prayer Banquet gave an emotional filled thank you note to all the sponsors and participants for their support, presence, and contribution, and encouraged everyone to stay united in prayers for the greater good of Rwanda.

CHUK to relocate to Masaka