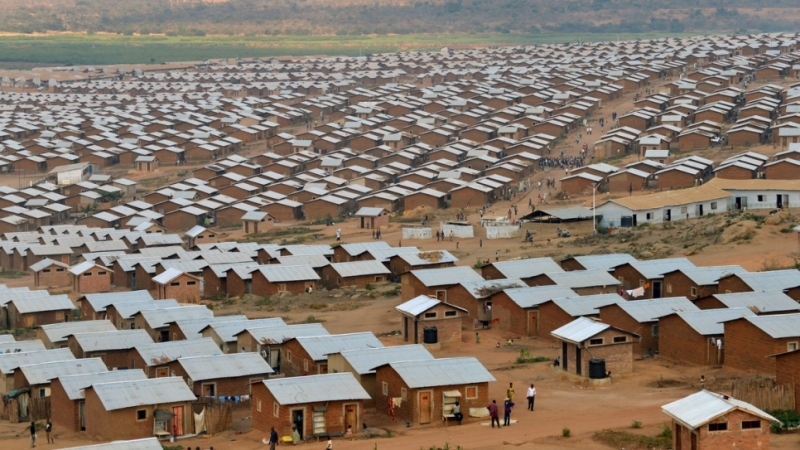 Before leaving Nyanza reception centre in southern Rwanda a day earlier, Charlene had gathered firewood and other supplies for their new home. “We only bought a few clothes with us,” she says. “You couldn’t take anything much with you.”

Violence broke out back in Burundi in 2015 after President Pierre Nkurunziza announced he would seek a third term in office. The constant threats and inability to meet militias’ demands for money forced the family to escape one cold night in June this year.

Now, Charlene and her family are among over 400,000 Burundians who have become displaced across the region in Rwanda, Uganda, Tanzania and the Democratic Republic of Congo (DRC) since the crisis started in 2015.

“We only bought a few clothes with us.”

UNHCR, the UN Refugee Agency, and partner agencies have today (Sept 29) launched an urgent appeal for US$429 million to help meet the needs of refugees like Charlene across the region. Of the requested amount, only 12 per cent funding has been received, making the Burundi situation one of the least funded refugee crises in the world.

“The chronic underfunding for the Burundi refugee situation has severely hampered reception capacities and the quality of protection rendered by host countries,” said Catherine Wiesner, UNHCR’s Regional Refugee Coordinator for Burundi, at the launch of the revised inter-agency regional refugee response plan in Nairobi, Kenya.

Refugees continue to live in overcrowded and congested camps, facing insecurity, deterioration of emergency shelters, shortages of water and food, and oversubscribed health and education services.

“Many refugee hosting areas are at risk of communicable diseases, including, malaria and acute watery diarrhoea,” added Wiesner.

In Mahama, the impact of the huge gap in funding is evident as UNHCR and aid agencies struggle to meet minimum standards for refugees.

“Funding is a major challenge in terms of being able to construct shelters and respond to all the needs of Burundian refugees,” says Janet Pima, UNHCR’s Protection Officer in Mahama.

“Because we keep on receiving new arrivals that means the needs are increasing every day.”

In Rwanda, more than 85,000 refugees live in cities such as Kigali and in Mahama. For a country as small as Rwanda, such numbers place a huge strain on resources and Mahama camp is already at breaking point.

“We have around 54,000 refugees in the camp and the space we have has already been occupied by semi-permanent shelters,” adds Pima.

“We don’t have any more space which is the main challenge we have for now. We will not be able to relocate any new arrivals until we have an extension of the camp.”

“We don’t have any more space.”

New arrivals have to wait for weeks, sometimes months, before they can be relocated.

UNHCR is negotiating with the Rwandan government and local communities that own the land around the camp. However, with every refugee that enters the  country, more pressure is added to already strained resources.

In Tanzania, where the majority of Burundian refugees are hosted, small numbers of refugees have already undertaken to return home spontaneously. A tripartite meeting was concluded between UNHCR and the governments of Burundi and Tanzania at the end of August 2017. Since then, plans have been put in place to assist an estimated 12,000 Burundian refugees to return home in the last quarter of the year.

However, the majority of Burundian refugees like Charlene and her family are not yet planning to return. For now, the relocation to Mahama is welcome and offers the chance to start afresh. The family has been registered, allocated a shelter, food and other supplies  giving them hope that they will be able to resume a normal life. “I think we will get used to things here as we can see things are okay,” says Charlene.

UNHCR continues to work with the government and partner agencies to receive and care for new arrivals despite the challenges, but the need for more support is crucial.

“If we don’t get the space soon, refugees will be congested in the shelters or they will have to remain in the reception centres for quite a long time,” says Pima. “We are appealing for more funding to help Burundian refugees.”

The Nobel physics prize goes to the spotters of gravity waves