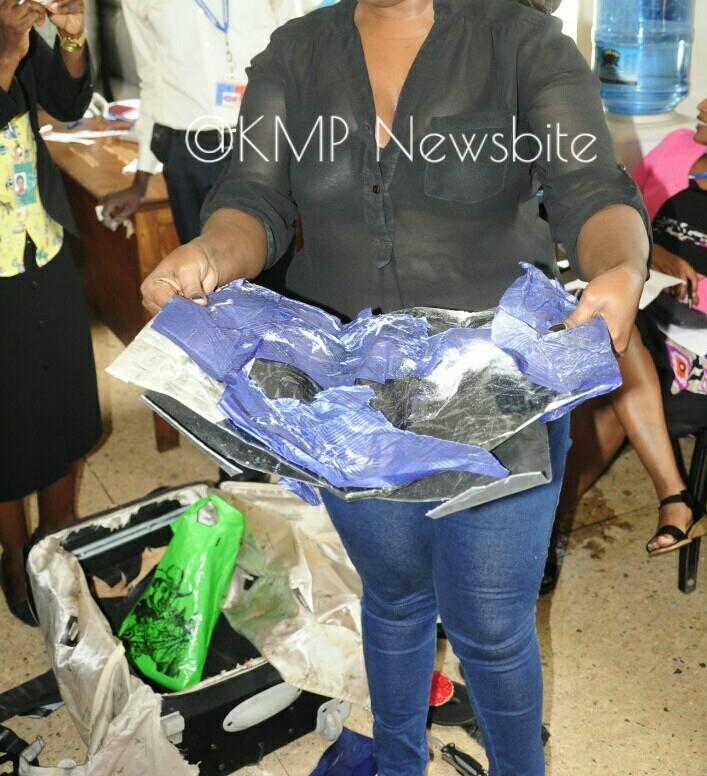 Aviation police arrests a woman trying to smuggle out cocaine worth 397 million through Entebbe Airport. The suspect identified as Beatrice Isaro a nurse from Rwanda was detected by the new technology equipment installed at the airport and was found with drugs concealed in a suitcase.

“Police recently procured machines with high technology intelligence which can never miss any slight illegal slip-in and that’s why we were able to arrest Isaro who tried to smuggle narcotic drugs out of the country”, the CIID Spokesperson SP. Vincent Ssekate said.

The aviation officers on arrest searched the luggage and found shoes,tea leaves,a towel,cocaine that was parked in papers and wrapped in a cloth for disguise.

Isaro was found with a Rwandan passport number EC 298229 and 1.59 kgs of cocaine that was being transported to Bamako the capital city of Mali. The police swung in and arrested her together with her counterpart Mr. Haruna Koli that was following her up. Its believe that he must have been connected to the smuggling deal.

Isaro is the second female to be arrested smuggling cocaine through Entebbe Airport within a period of one month, early this month Allen Nankanja was arrested trying to smuggle cocaine from Brazil into Uganda by concealing it her knickers.

Isaro a born of Lwebitakuli told Police that the suitcase was given to her by her friend called Issa that had met her earlier at Pioneer Mall and asked her to deliver it to his brother in Mali.

When asked about the reason for travelling to Mali she said a friend called Mitchel requested for her help in buying merchandise and reselling it in Kigali.

Isaro was charged with Smuggling Narcotic Drugs CRB 333/17 and is detained at Entebbe Aiport Police.