A brand new incarnation of the official limo dubbed ‘the Beast’, built especially for President Trump, is set to be unveiled in a matter of months.  The armored $1.5 million Cadillac – which comes complete with eight-inch thick doors, a bomb-proof exterior, and an oxygen supply in case of a chemical attack – has been handed over to the Secret Service for final tests. 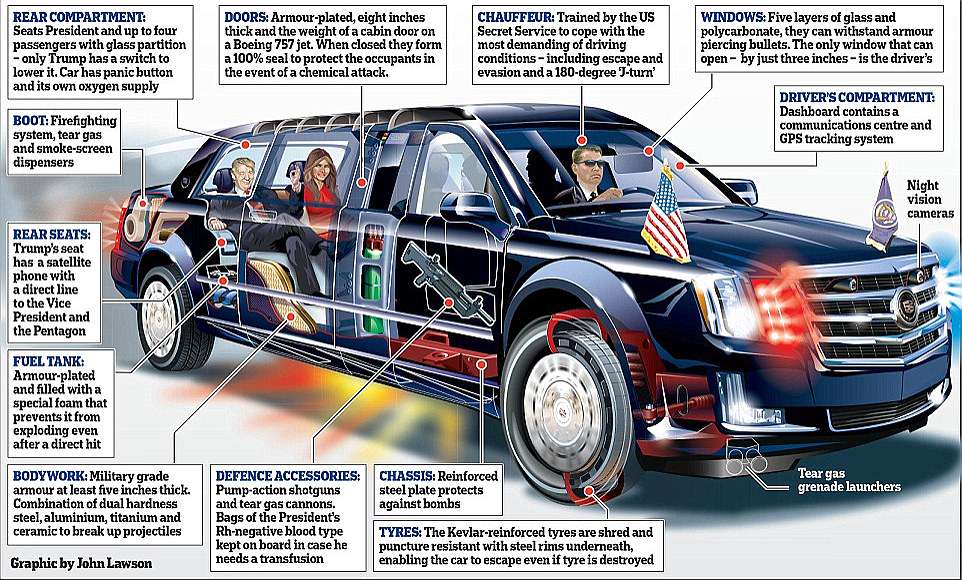 It was meant to be ready for Trump’s inauguration last year, but the completion date was repeatedly pushed back until officials announced on Thursday it would be unveiled in ‘late summer’.

A spokesman for the U.S. Secret Service confirmed the news, and added: ‘The program to build and deploy the next generation of Presidential limousines is on track and on schedule — both in terms of vendor production and internal Secret Service post production requirements.

‘The public can expect to see the new vehicles put into operational use late summer of this year.’

The sedan is longer than two large SUVs and, for the moment, remains in white and black camouflage designed to make it more difficult to identify new features aboard the vehicle.

For the moment, President Trump has to make do with an earlier model of the Beast which was built for President Obama.

Leaked photos from November 2016 showed a prototype of the new vehicle being driven on public roads.

The final version will be painted black and silver just like the current version, once it is given the final approval.

It will be part of a fleet of 12 which cost around $15.8 million and is arguably the safest vehicle in the world, as befits the President of the United States.

The Beast weighs eight tonnes and has eight-inch thick steel doors that weigh the same as those on a Boeing 757 – and are sealed to withstand biological and chemical attacks.

The front windscreen can withstand armour piercing bullets or a .44 magnum and the bodywork is military grade and five inches thick.

The reinforced undercarriage with withstand going over a roadside bomb and the fuel tank is explosive resistant.

Only the driver’s side window can open in case he needs to pay a toll – and in the boot are cases of the President’s blood for an emergency transfusion.

Among the other features are shotguns on board in case an attack breaks out, Kevlar tyres that run even if they are flat and an oxygen system in the trunk in case of a chemical attack.

A number of guns are hidden in the front grille of the vehicle which can be used to fire on an attacker.

But while the appearance of the car might be mundane from the outside, under the skin it is anything but ordinary.

The current state car is thought to weigh eight tons due to the huge amount of armor plating built into the frame.

The doors are around eight inches thick, each weigh the same as the door of a Boeing 747 jet, and completely seal the cabin to protect it from a chemical or biological attack.

Concealed in the trunk is an oxygen supply that allows fresh air to be pumped into the cabin in the event that the air outside becomes toxic.

All of the windows are completely sealed and unable to roll down, except for the driver’s side to allow him to pay tolls, and are able to withstand armor-piercing bullets and explosions.

The tires are coated in Kevlar to protect them from bursting, but even if they do, the metal rims are strong enough to hold up the vehicle and keep it rolling in case the outer layer is blown away.

The fuel tank is coated with armor plating and contains a special foam which expands on impact and prevents it from exploding, even if it suffers a direct hit.

The vehicle is also fitted with night vision cameras, GPS tracking and a satellite communication system to allow it to run in any conditions and make sure the President is always in contact.

There are even two pints of blood matching the President’s type on board in case an emergency transfusion needs to be carried out at the roadside.

Concealed within the bodywork is a full range of firefighting equipment, shotguns, night vision goggles and even tear gas launchers to help the vehicle get out of trouble.

While few details are known about the devices fitted to the new car, it is likely that all of these safety features will be transferred over, along with technology upgrades to make it even safer.