The Nobel physics prize goes to the spotters of gravity waves 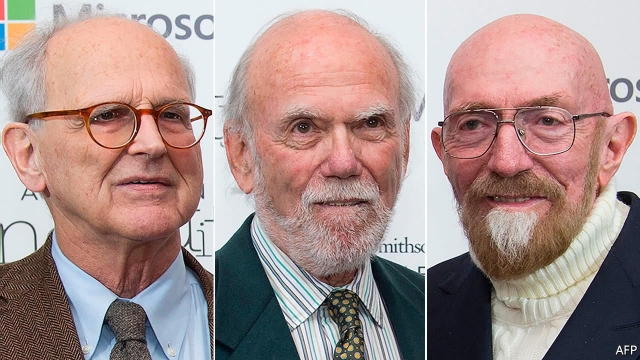 WAITING for a Nobel prize can be time consuming. Since 1985, more than half of the prizes in physics have been awarded for work done more than two decades previously. This year’s prize, though, was different. It went to Rainer Weiss, Barry Barish and Kip Thorne, all of whom were involved in the first-ever detection, just two years ago, of gravitational waves.

Such waves are one of the many predictions of Albert Einstein’s century-old theory of relativity. As Einstein realised, gravity arises from the fact that mass distorts the space and time around itself. That distortion modifies the paths of objects moving nearby.

Crunch the equations which describe the process, and they suggest that moving masses should create ripples which radiate out into the universe.

Several years ago, observations of the behaviour of pairs of dead stars called pulsars provided indirect evidence that such waves are real. But detecting them directly has proved harder, for gravity waves are ephemeral things. The ones spotted in 2015 came from the collision of a pair of black holes, one of the most violent events in the universe. By the time the ripples from that catastrophe had reached Earth, 1.3 billion years after the event, they had faded into the merest breath.

Spotting such susurrations requires sensitive machines. All three laureates worked on an American gravity-wave detector called LIGO, which was completed in 2002. LIGO works by splitting a laser beam in two and sending the daughter beams up and down a pair of tunnels, each four kilometres long, which are set at right angles to each other.

Any passing gravity wave should stretch and compress the two arms in different ways, causing infinitesimal changes in the time it takes the laser beams to traverse them. In order to confirm that it really is seeing gravity waves the machine has two such pairs of tunnels—one in Washington state and one in Louisiana. A gravity wave, as opposed to some transient local disturbance, will be seen almost (but not quite) simultaneously at both.

Despite its sensitivity, LIGO’s initial run came up empty-handed. It was only after a series of upgrades, starting in 2010, that it became sensitive enough to detect the waves finally and unambiguously.

Spotting them meant ruling out interference created by things like lorries travelling on nearby roads, or ocean waves crashing against the shore hundreds of kilometres away.

Since 2015, more discoveries have been made. A few days before the Nobel award, LIGO announced the detection of its fourth gravitational wave.

And more detectors are coming online. The most recent detection was aided by a European instrument, VIRGO, based in Italy. Other devices are under construction in India and Japan. A space-based system called LISA, with “arms” millions of kilometres long (and, as a result, much higher sensitivity) is scheduled for launch in the 2030s.

But this year’s physics prize honours more than just another confirmation of Einstein’s cleverness. Machines like LIGO and VIRGO are not merely detectors. They can be used as telescopes, too. Up until now, astronomers have had to rely on the electromagnetic spectrum—from radio waves, through visible light, to gamma radiation—to gaze at the universe.

Gravity waves offer a new window on the world, and could help astronomers see things, like black-hole collisions or the state of the universe shortly after the Big Bang, that electromagnetism cannot.

Journalists Advocate Commitment to Building Peace in Our Times