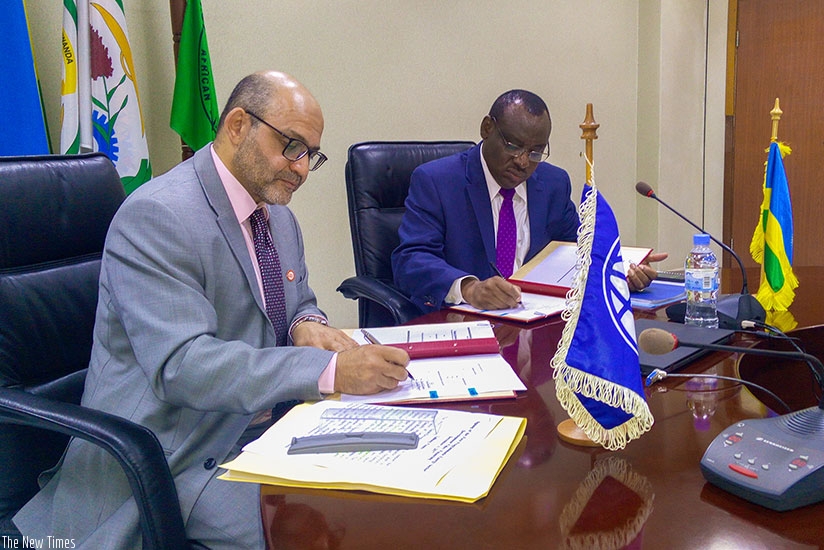 With the government targeting to connect 70 per cent of Rwandans by the end of next year, and a hundred per cent in the next seven years, more investments will be required in the energy sector to contribute to the attainment of this target.

This was revealed yesterday during the signing of the financing agreement worth $125 million (approximately Rwf104 billion) between the World Bank and the Ministry of Finance and Economic Planning (MINECOFIN).

Officials said that it is through investments like this that the government will be able to deliver its promises, and that this particular loan agreement will significantly contribute to accelerating electricity rollout.

“We need electricity access for schools, ordinary people and companies. It is critical in a way that it drives our industries. This World Bank’s investment in the energy sector is, therefore, very important,” said Claver Gatete, the minister for finance and economic planning.

The country wants to raise the generation capacity from the current 213 megawatts to 563 megawatts to achieve universal access to affordable electricity within the next seven years.

According to Germaine Kamayirese, the minister of state in charge of energy, water and sanitation at the Ministry of Infrastructure, nearly 41 per cent of households have been connected and there is more that needs to be invested to connect the 60 per cent.

“This is really a big boost towards the attainment of the seven year government programme, particularly to extend electricity to all Rwandans at a sustainable fee. Today, we have covered almost 41 per cent of the households, and to achieve the 60 per cent, we need more support like this,” she said.

It is part of a three-year DPO series worth $325 million (approximately 271 billion) which is a continuation of the World Bank’s current financing in the energy sector.

Unlike the commonly known financing agreements that target specific projects, Gatete mentioned that this goes directly to the general budget of the government that supports the energy sector.

“This is one of the largest signing we have ever had with the World Bank. This is a big part of the energy financing that has been agreed on between the government and the bank. The money goes directly to supplement the existing budget of the energy sector,” the minister noted, adding that the bank’s investment in the energy sector has been very incredible.

Yasser El-Gammal, the World Bank Rwanda country manager, said that Rwanda’s ambitious plans toward energy sector have attracted the attention of the bank, explaining that Monday’s financing agreement is part of the bank’s commitment to continue supporting to the country.

“This is a beginning of a three-year programmatic support in the form of development policy operation that has a particular focus on energy sector. Rwanda wants to achieve universal access to electricity and in this context the government has done impressive reforms in the sector, which has made it possible for us to come in,” he said.

“In 2013, we saw the creation of reliable, accountable off-takers and institutional reforms that took place. The focus is now to deliver on the targets both on access and affordability to enable businesses and people have access to affordable power, but most importantly in a fiscally sustainable way, which is what this project is focusing on,” Gammal added.

The money which will be disbursed within this month will contribute to improving the operational efficiency, affordability, and accountability of electricity.

Jean Claude Kalisa, the managing director of Energy Utility Corporation Limited (EUCL), said that they are currently working on systems that will bring efficiency and reduce electricity supply losses.

Since 2010, the country’s power generation capacity tripled from 76MW to 213MW in June this year. Investments in grid extension have also increased the connections by 230 per cent since 2010, covering 100 per cent of hospitals, 93.2 per cent of health centres, 92.1 per cent of administrative offices, and 69.9 per cent of primary and secondary schools.

Meanwhile, yesterday’s concessional loan has a maturity of 38 years with a grace period of six years, and will be paid with an interest rate of 0.75 per cent.

This first DPO will be followed by two other series, each worth $100 million.

The sell-by dates you shouldn't swallow...