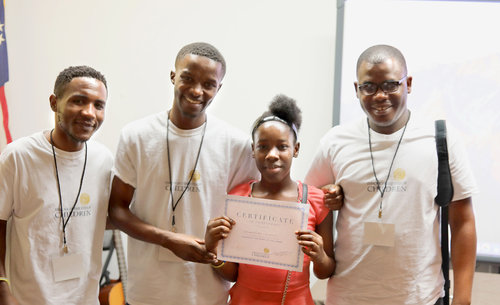 NEW YORK, January 22, 2019 — Photography can change lives. It did for 19 Rwandan orphans who participated in the award-winning photo project Through the Eyes of Children that was founded in 2000 in the aftermath of the Rwandan genocide against the Tutsi. Now today, those young photographers or “Camera Kids” as they were fondly called, have grown up and are teaching photography to other vulnerable youth in the world. And they are raising money via Kickstarter to help fund the photo workshops.

“Photography helped us rebuild memories and connect us to our community,” noted Mussa Uwitonze, one of the original Camera Kids and now one of the photographic instructors. “We had lost everything in the war; our families, our homes, but through photography, we started creating new memories.”

“With a camera in our hands, we were not seen as victims of the genocide any more. We were important members of the community documenting life as we saw it, through the eyes of children,” said Gadi Habumugisha, another of the Camera Kids and now a photographic instructor.

“My first photos were blurry,” recalled Jean Bizimana, who was eight years old in 2000 when the project began. “But I didn’t mind and through our lessons, my photos got better. Little did I know then that a camera would change my life… but it did.”

Growing up in Rwanda in the aftermath of the Rwandan genocide against the Tutsi, 19 children out of several hundred living in the Imbabazi Orphanage were given the incredible gift of learning photography with the U.S.-based nonprofit Through the Eyes of Children. Many of the children were just eight years old when the project began and had never seen or held a camera before. The workshops were held over 11 years with the same children and the resulting photographs, which are believed to be the largest body of photographic work in Rwanda post genocide created by survivors, have been exhibited throughout the world, including at the United Nations and at the New York and Los Angeles premieres of the movie Hotel Rwanda, the Human Rights Watch International Film Festival, The Holocaust Museums of Houston, Texas, and Naples, Florida, and at several universities throughout the U.S. and in Europe. Funds raised through the children’s photography helped to pay school fees for all of the children at the Imbabazi Orphanage and proved to them that people value their perspective and were interested in seeing Rwanda through their eyes.

Through the Eyes of Children was originally conceived by photographer David Jiranek (1958 –2003) in collaboration with The Imbabazi Orphanage where the children lived. The Orphanage was established in the aftermath of the 1994 Rwandan genocide against the Tutsi by American Roz Carr, who was 82 years old when she dedicated herself to care for hundreds of orphaned children. David began the photo project at Imbabazi with annual four-week photographic workshops centered on the importance of the children’s perspective and experience. Nineteen children, ranging in ages from eight to 18, were given disposable cameras and taught the fundamentals of photography as they documented themselves and their community. Their photographic body of work documents their lives in Rwanda as the country was rebuilding.

In the Spring of 2001, after David completed his first workshop, he invited photographer Kristen Ashburn, public relations professional Jenifer Howard and brand strategist Joanne McKinney to help. When David tragically died in 2003, the project continued on through their volunteer efforts. Today, Mussa Uwitonze, Gadi Habumugisha and Jean Bizimana, three of the original Camera Kids, have stepped up to lead Through the Eyes of Children for the future. They have also taken their training in photography and made careers out of it with Bizimana working as a staff photographer with Reuters Africa; Gadi with Starwood Hotels photographing African and European properties; and Mussa working with other NGO’s helping document their work in photos. As this project comes full circle, Gadi, Mussa and Bizimana, once child photographers and Camera Kids themselves, are bringing their work, their lives, their achievements and their hope for tomorrow directly to the next generation of Camera Kids.

Photo workshops with street children in Rwanda, Haitian immigrant teens in New Jersey and foster children in Boston have been completed. In 2019, with the help of the funds raised in the Kickstarter campaign, the trio will travel to Ethiopia, Lebanon, Haiti and South Africa to teach additional photo workshops — all while being followed by a documentary filmmaker from the GroundTruth Project, who is working on a feature-length film about their lives and the photo workshops.

This is a true success story of how love, education — and photography — transforms lives. What started as a project to bring a glimmer of joy into the lives of orphans has morphed into a powerful, life-changing means of work, income and artistic expression.