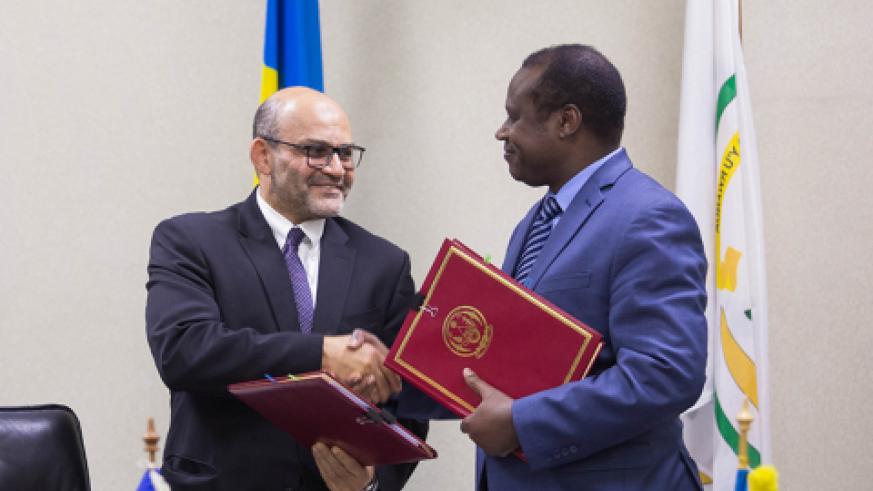 The Government of Rwanda and the World Bank, on Monday, signed a $20 million credit facility to support the Ministry of Finance and Economic Planning (MINECOFIN) in budget transparency and reliability.

The fund, which has been earmarked for the Public Finance Management Reform Project (PFMRP), will see MINECOFIN expand the Financial Management Information System (FMIS) coverage and Electronic Government Procurement system (e-GP) as well as provide IT backbone to all decision-making processes in the country.

Speaking after at the signing ceremony, Finance Minister Uzziel Ndagijimana said that the loan (approximately Rwf17bn) will be repaid in 38 years at an interest rate of 0.75 %. The credit has a 6-year grace period.

“The loan will facilitate the enhancement and rollout of these systems (FMIS and (e-GP),” Ndagijimana said.

The credit will benefit a “pool of PFM core institutions”, including the Ministry of Finance, Rwanda Public Procurement Authority (RPPA), Institute of Certified Public Accountants of Rwanda (ICPAR).

PFMRP has four components, namely; PFM IT systems rollout which will take about $5 million; Accountability and financial reporting which was allocated $3.55; performance-based budgeting and mid-term budgeting which will take $0.7million; and the last component—which took the lion’s share of the loan—is about the professionalisation of PFM staff (PFM Capacity development) $10.85 million.

Yasser El- Gammal, the World Bank Group Country Manager, said the agreement is a continuation of an area the two parties have been engaged in for a while, a sector he considers “foundational” in accountability.

“Public financial management is a foundational sector, because you can have the money but if you are not able to spend the money wisely, properly—be able to account for it—then your leakages become high,” El-Gammal said.

“Rwanda already has a solid public financial management system, and this is a support that is anchored in the overall sector strategic plan of the country”.

El-Gammal also hopes that the deal will be able to enhance accountability at the grassroots levels, which would allow the Government to have more reliable medium term budget, and, most importantly, support human capital that is involved in the public financial management space.

Marginalized people live in pity that any Rwandan doesn’t deserve