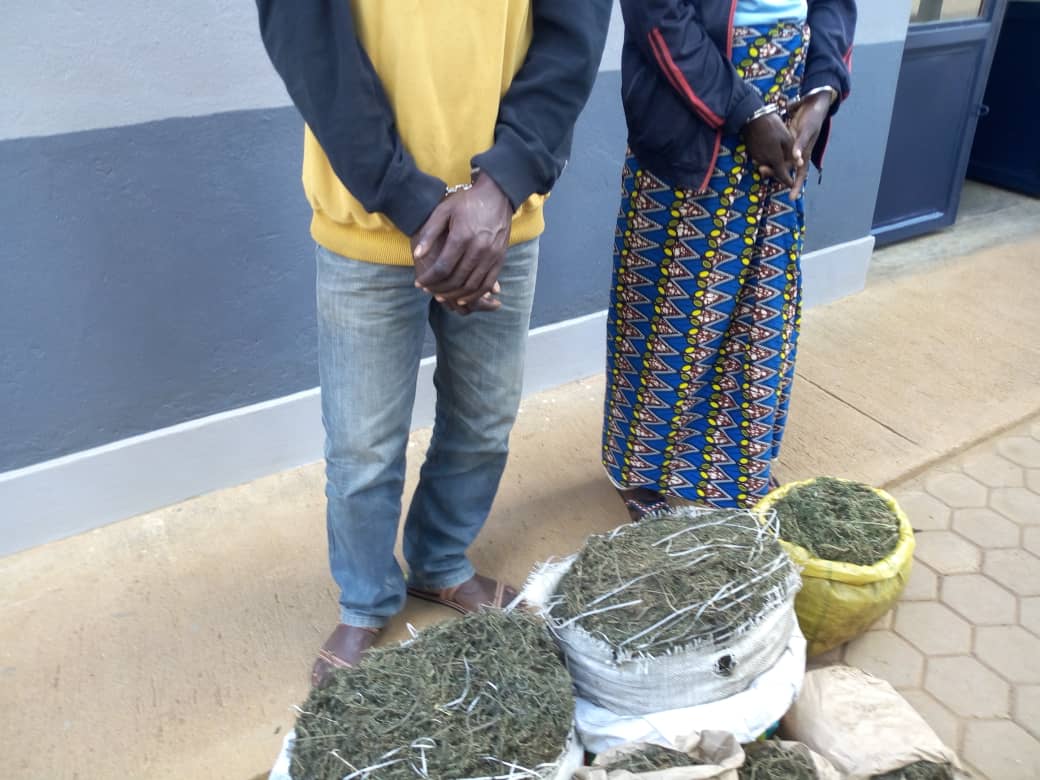 A man and woman said to be notorious drug dealers have been arrested separately by the Police in the ongoing crackdown on major suppliers.

Emmanuel Uwitonze and Vestine Nyiramahingura are said to be part of the rings that traffic cannabis into the country and supplies to local retailers especially in the Eastern Province and the City of Kigali.

Uwitonze was taken into custody on February 24, in Kigabiro Sector of Rwamagana District as he delivered 10kgs of cannabis to one of his retailers.

Nyiramahingura, on the other hand, was arrested in the morning hours of Tuesday in Mukarange Sector, Kayonza District with a sack of cannabis.

The duo was paraded before the media at Kicukiro Police Station, yesterday.

“I got 25kgs from another supplier in Kirehe District and I had just arrived in Kigabiro to deliver 10kgs to one of my customers, I was arrested by the Police on arrival. I didn’t know that my customer had also been arrested,” Uwitonze said.

He added: “They caught me red-handed, so I had no other option but to be cooperative, I took them home where I had other sacks of cannabis, which they also confiscated.”

“This is a dangerous business; today you get customers and tomorrow you hear they have been arrested. I had invested Rwf170, 000 targeting at least Rwf800, 000 but I have ended up with nothing and worse still I am likely to face a long-term imprisonment,” he reckoned.

The jail term for any convicted major drug dealer ranges between 20 years and life in prison under article 263 of the new penal code.

To Nyiramahingura, she said she was working with a man also from Kirehe whom she only identified as Vianney.

“Vianney would bring varied quantities of cannabis on different occasions and I would bury it in my garden. He would also bring different customers; some I know them from Kayonza town and others that I don’t know,” Nyiramahingura said.

“It’s a three-way response strategy; breaking chains of supply, raising awareness to prevent new users and working with the Ministry of Health  and other concerned institutions to ensure that addicts are rehabilitated,” CP Kabera said.

“We are also working with the general public, local leaders and also get information from drug dealers themselves. When we arrest one he or she leads us to another or the whole chain.”

CP Kabera also disclosed that the Police Anti-Narcotics Unit has a list of suspected major suppliers and thanked the general public for being major players in this fight providing credible information that facilitates such successful operations.