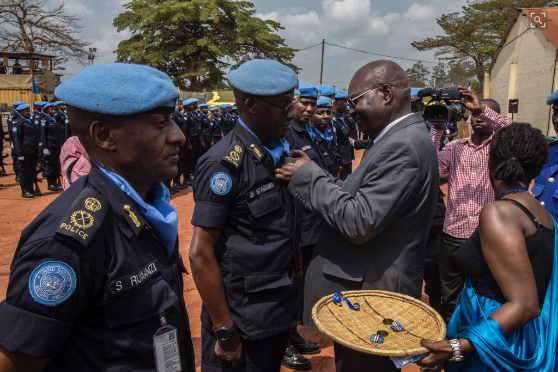 The United Nations, on November 15, 2018, awarded 431 Rwandan Police peacekeepers serving in its mission in Central African Republic (CAR), with the medal of service excellence. The medals serve as recognition for their efforts in furthering peace and security under the UN Multidimensional Integrated Stabilization Mission in the CAR (MINUSCA).

The contingents, on the other hand, served in various duties including public order management, protection of internally displaced persons, key installations and infrastructures.
Others include escort of high profile government officials, top UN staff and other related duties as well as rendering humanitarian assistance, among others.
The medal parade held at the RWAPSU camp base MAMICA in the capital Bangui was presided over by the Prime Minister of CAR, Simplice Sarandji.
The event was also attended by the Deputy Representative of the UN-Secretary General to MINUSCA, Kenneth Gluck and MINUSCA Police Chief of Operations, Colonel Philippe Garcia as well as the Rwandan community and friends of Rwanda in CAR.
Prime Minister Sarandji thanked the Rwandan contingents for their sacrifice in ensuring safety and peace for the people of CAR.
“Rwandan sons and daughters, alongside with their Central African brothers and sisters are fighting to bring peace to the Central African Republic people. Your sacrifice is noticed in the peace that is returning to CAR,” the Prime Minister said.

The UN-Secretary General to MINUSCA, Kenneth Gluck also thanked the Government of Rwanda for its commitment to global peace.

Gluck said: “It is a great honor to join the Rwandan Police medal ceremony and to recognize your excellent contribution to peace in CAR. We salute you today for your hard work. Thank you for your service.”

Despite the mission challenges, Gluck said the decorated officers maintained their dedication and commitment spirit.

“Your efforts have been critical to the success of MINUSCA, and you can be sure your work has had positive effect on the lives of Central Africans.”
On his part, MINUSCA Police Chief of Operations, Col. Philippe Garcia lauded the professionalism of the Rwandan Police peacekeepers adding that they serve as an example for others to emulate.
Col. Garcia emphasized the need to continue to “guard the UN standards” especially the policy of zero tolerance against sexual exploitation and abuse.
RNP
UM– USEKE.RW
Share:
Facebook0Tweet0LinkedIn0Pin0