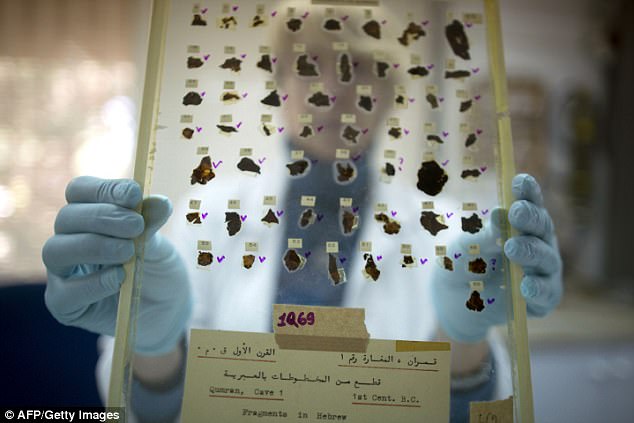 Remains found near the site where the scrolls were discovered suggest the bodies were linked to an celibate Jewish brotherhood known as the Essenes.

The Dead Sea Scrolls have fascinated scholars and historians since the ancient texts were found around 70 years ago scattered within a series of caves in the West Bank.

Thought to have been written between 200 BC and 100 AD, the scrolls inscribe some of the oldest known foundations of the Old Testament.

Despite experts citing the texts as among the biggest archaeological finds of the 20th Century, their origins and authorship have remained a mystery for decades.

Ever since their discovery, a number of suggestions have been put forward as to who created or oversaw the texts, including soldiers, craftsmen, people from the Iron Age, or Bedouins.

Now an analysis of remains found in 33 newly uncovered graves could help experts to understand the mysterious texts’ history.

Analyses of the bones support a previous theory that the scrolls were written or guarded by members of a celibate, all-male Jewish sect called the Essenes.

The mysterious group flourished in Palestine from the 2nd century BC to the end of the 1st century AD.

Like the scrolls themselves, the graves were found in Qumran, an archaeological region in the West Bank along the northwestern shore of the Dead Sea.

Anthropologists from the Israel Antiquities Authority in Jerusalem radiocarbon dated the bones, revealing they are about 2,200 years old, around the same age as the scrolls.

But it was not just the age of the bones that linked them to the ancient texts.

All but three of the 33 skeletons were identified as probably male, based on factors such as body size and pelvic shape.

The remaining remains may have belonged to men too, but not enough skeletal evidence exists to be sure.

Of the 30 skeletons identified as male, each was aged between 20 and 50 – or possibly older – when they died.

These parallels suggest the skeletons were once members of the mysterious Essenes crypt, the researchers claimed.

‘I don’t know if these were the people who produced the Qumran region’s Dead Sea Scrolls,’ project scientist Dr Yossi Nagar told ScienceNews.

‘But the high concentration of adult males of various ages buried at Qumran is similar to what has been found at cemeteries connected to Byzantine monasteries.’

Given the lack of signs of injury on their bones, them men were unlikely to have been soldiers, the researchers said.

Dr Nagar presented the findings last Thursday during the annual meeting of the American Schools of Oriental Research.

As there appears to be no women in the burial, the group was likely a ‘community of ideologically celibate men… child proportion and adult age at death distribution match the common desert monasteric societies of the subsequent periods’, the researchers, led by Dr Nagar, wrote in their paper.

Previous finds at sites around Qumran have suggested it was founded more than 2,700 years ago.

The people of Qumran abandoned the area after war tore the region apart, returning to reoccupy it for 200 years, up to around 68 AD.

An early theory on the creation of the Dead sea Scrolls claimed that members of an ancient, celibate Jewish sect, the Essenes, lived in Qumran.

The theory says the group either wrote the Dead Sea Scrolls or were caretakers of the legal, philosophical and religious documents.

Over the past 30 years, many other theories have been put forward, including that the scrolls were written by Bedouin herders, craftsmen and Roman soldiers.

Robbers made away with cash after drilling tunnel from shopping complex