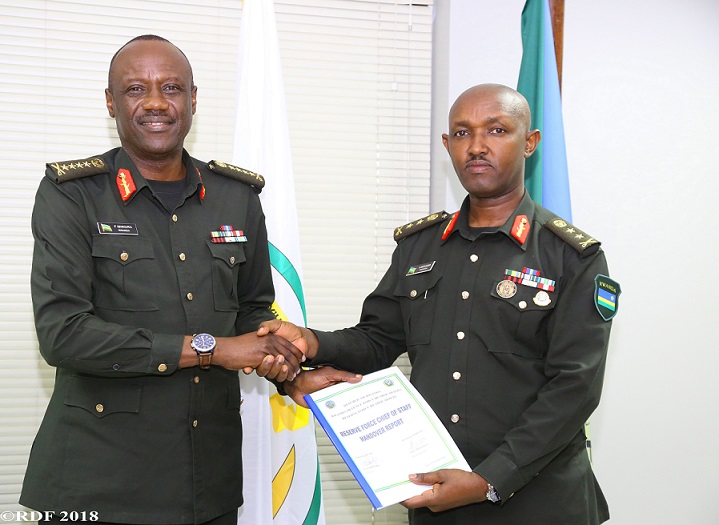 The outgoing Reserve Force Chief of Staff (RFCOS) Gen Fred Ibingira has officially handed over office to his successor Maj Gen Aloys Muganga. This was during a ceremony, presided over by the Chief of Defence Staff (CDS) Gen Patrick Nyamvumba, at the Rwanda Defence Force headquarters in Kimihurura.

Maj Gen Aloys Muganga was appointed by HE Paul Kagame, The President and Commander-in-Chief of Rwanda Defence Force (RDF) on Tuesday 20 November 2018.

In his address, Gen Ibingira congratulated the newly appointed Ag RFCOS who has been the Commandant of Rwanda Military Academy-Gako.

“I would like to thank the leadership and entire MoD/RDF family for the support extended to me in executing the duties as Reserve Force Chief, and I wish the incoming RFCOS success.’’ said Gen Fred Ibingira.

Both Gen Fred Ibingira and Maj Gen Aloys Muganga thanked the President and Commander-In-Chief for believing in them. Maj Gen Muganga in his address promised cooperation and to always work as a team player.

On his part, the new Ag RFCOS, Maj Gen Muganga appreciated his predecessor for leaving a lasting legacy.

“I’ll forever be indebted to the Commander in Chief and the President, MoD/RDF family for the trust and giving me the opportunity to serve my country in this capacity.’’ He said.General Aloys G Muganga also pledged to always seek counsel from his predecessor.

The incoming Chief of Staff holds a master’sdegree in project management from Maastricht University inthe Netherlands and is a graduate of the United States of America War College (USAWC – 2007). His other previous postings include, Mechanized Division Commander, Defence Liaison Officer for Rwanda at EAC – Arusha among other RDF command and staff responsibilities.