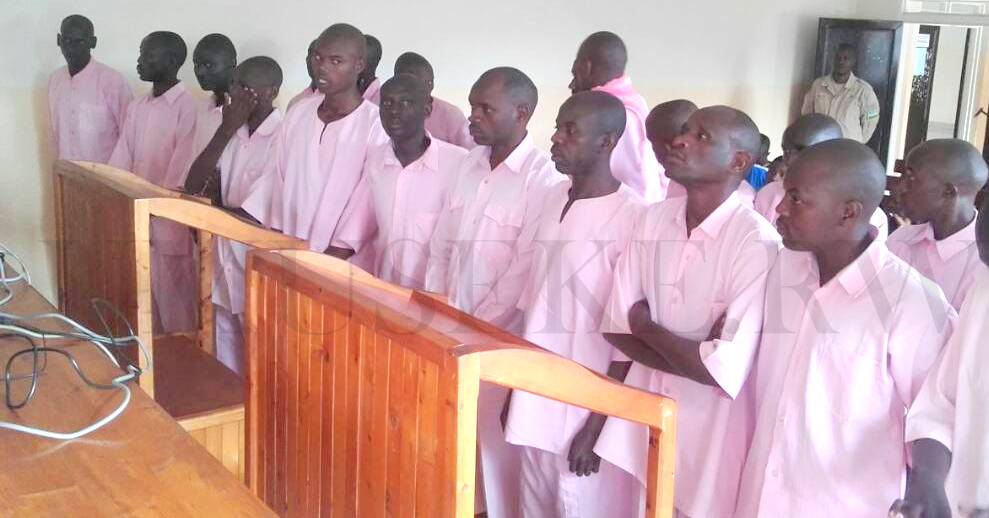 A group of 26 men accused of fueling the demonstration of Congolese refugees at Kiziba Refugee Camp has appeared in Karongi Court. This comes after the series of postponement of the case since last year after their demonstration in February 2018.

On this Tuesday, this group appeared excluding the representatives of the refugees who are embedded in another different group accused of leading this demonstration that claimed the lives of 10 shot by policemen who claimed to defend themselves.

The prosecution accuses the defendants of attacking, beating and wounding the security officers, rebellion, illegal demonstration and being against the laws of the country.

In yesterday’s hearing, the prosecutor added that they did all those using traditional weapons. This directly led to the whispers of the defendants signaling that they disagree but then the president of the court reminded them of not speaking in the court with no permission.

This group is mostly made of those who were part of rebel groups in the Democratic Republic of Congo and two veterans of Rwanda Defense Force who retired due to special illness classified in third category.

In the court, the two defended themselves saying they shouldn’t be tried hinging on the fact that they have mental disability. However, the prosecution disagreed presenting documents from Ndera Hospital proving that they don’t have such kind of disability.

Other defendants and their lawyers said they didn’t attack security officers and accused the latter of using extraordinary efforts to move them where they were at the time of demonstration.

On this Wednesday, the other group is to be held in a different trial that includes the members of the representation committee of the refugees.

The refugees demonstrated in February 22-23, lamenting that their aid had been reduced up to 25%.

Kiziba Camp is a home for over 17 thousand Congolese refugees. According to UNHCR, 77% of them are children.