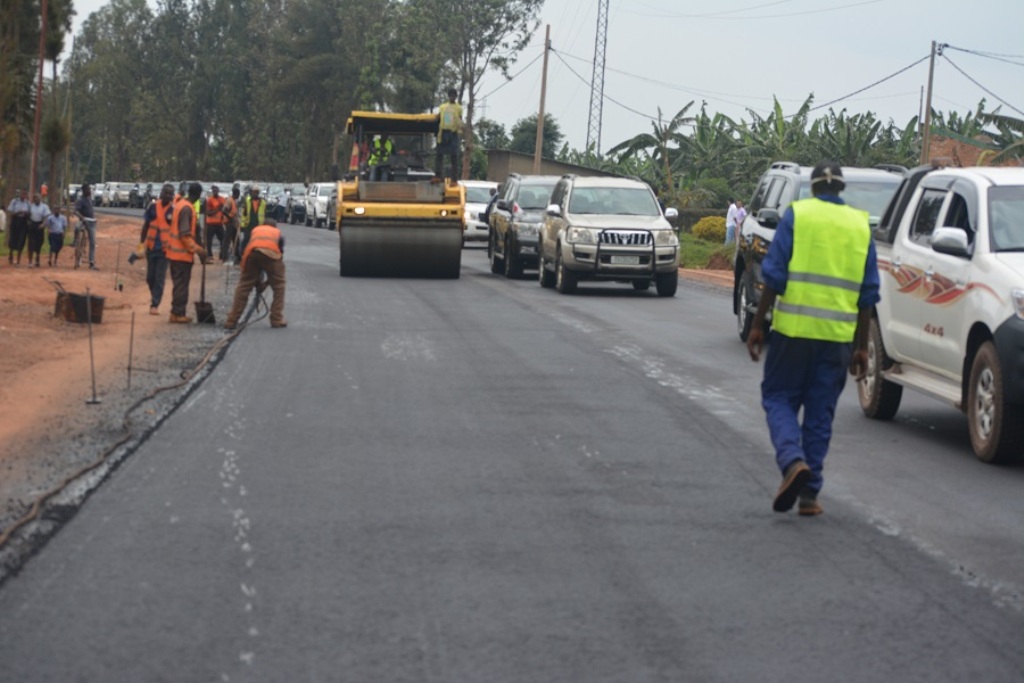 The main objective of the ongoing rehabilitation and widening of the road network is to improve and develop transport infrastructure to enhance economic growth.

The launch was presided over by the Minister for Infrastructure, James Musoni, and graced by Nicola Bellomo, the head of EU delegation in Rwanda, Takayuki Miyashita, the Japanese envoy to Rwanda, and Martha Phiri, the new AfDB country representative, among others.

Musoni said: “When people have good leadership, nothing is unattainable. We expect a lot in terms of the provincial and the country’s development. The benefits start with employment opportunities and all the others that will follow on completion of the project.”

Contractors will also ensure that the entire road is lit and the minister urged people along the road network to take advantage of opportunities it will bring.

Among others, the minister stressed the need for the project to be delivered on time and be of the expected quality. And, when it comes to jobs, he emphasised, “priority should be given to the locals.”

The road is part of the bigger multinational Uganda-Rwanda [Busega-Mpigi and Kagitumba-Kayonza-Rusumo] roads project and is considered an important project connecting the Northern Corridor to the Central Corridor. It will contribute to socio-economic development, poverty reduction and regional integration between the three neighbouring East African Community (EAC) countries, officials said.

According to the Ministry of Infrastructure, the main objective of the project is to improve and develop the transport infrastructure in order to enhance the economic growth in Uganda, Rwanda and Tanzania.

The project is specifically intended to contribute to reduction in transport costs; increase economic empowerment of women – 800 women traders at the border will be trained – and poverty reduction by improving household incomes and well-being through increased access to markets and social services.

Martha Phiri, the AfDB country representative said he was encouraged by the emphasis on accountability and quality service delivery in Rwanda. He added that the bank was cognizant of the strategic importance for trade in Rwanda and the region.

Besides helping increase household incomes in eastern Rwanda, the project, she said, has the potential to transform Rwanda into a regional logistics hub.

“This is the first official development assistance loan project with concessional modalities of 0.001 per cent interest and 40 years of repayment period, including 10 years of grace period,” said Takada Hiroyuki.

“This project started just after the completion of the Japanese grant assistance to construct the Rusumo international bridge and one stop border facility. We firmly believe that these two projects will play a pivotal role in opening more the central corridor not only to Kigali but also connecting to the northern corridor via Kagitumba land border”.

The main components of the project include civil works such as the construction of 10 water boreholes and rehabilitation of 10 milk collection centres, supervision consultancy services and technical audit, and compensation and resettlement.

The first lot which commenced on September 15, 2017 involves rehabilitation and widening of the 60km Kagitumba-Bugaragara-Gabiro road, which is financed by the government, EU and ADF.

The contractor of the first lot, STECOL Corporation, is supposed to finish work in 24 months.

The second, 56 kilometer Gabiro-Kayonza lot, which was given to Hunan Road and Bridge Construction Group Company, commenced April 24, 2017 also has a 24 month duration.

The third lot – rehabilitation and widening of the 92 kilometer Kayonza-Rusumo road – which began on May 15 last year, is a joint venture between China Road and Bridge Corporation and local firm NPD Ltd.

I know they are coming for me: Raila