I know they are coming for me: Raila 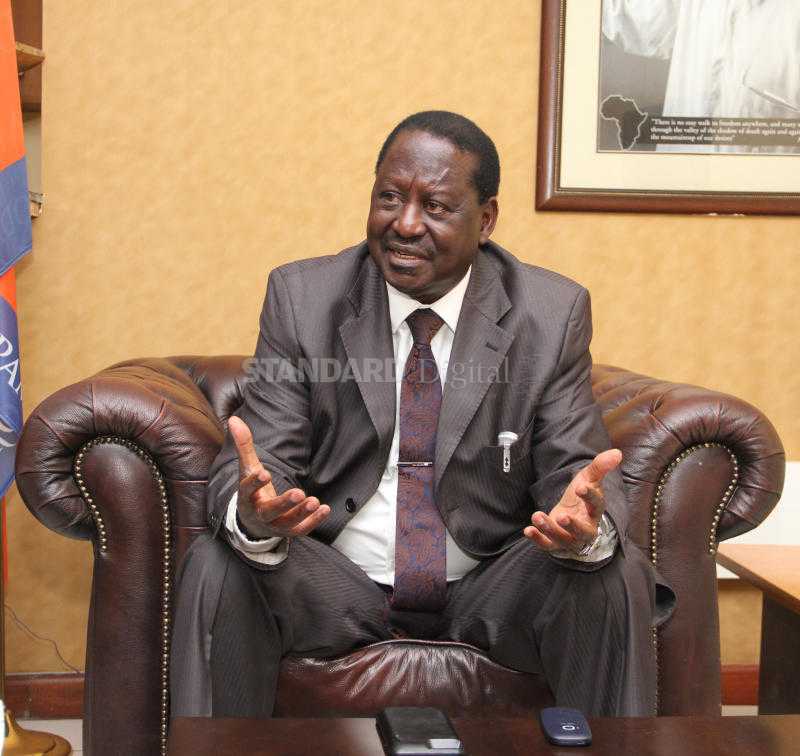 Opposition leader Raila Odinga remained defiant yesterday in the face a State crackdown on those associated with his contentious swearing-in on January 30. Raila said he was ready to pay the ultimate price if, according to him, it would translate into a free electoral process in future.

“I know they are targeting those who were present at the swearing-in to get to me. But I am not afraid of them. I am ready to pay the ultimate price,” Raila told The Standard in an interview at his office in Nairobi. Speaking for the first time since the event at Uhuru Park last week, Raila said: “The country is under threat from a government attempting to turn back the hands of time and re-introduce an era where the President enjoyed unfettered authority.

“But they are living in denial. The people are angry at what is going on. That is why we will stay the course,” he said. Those thought to have been behind the plotting and execution of the ‘swearing-in’ have been targeted by the national government. Lawyer Miguna Miguna was perhaps the hardest hit, with his involvement in the January 30 event earning him an arrest, a stint in detention and eventual deportation to Canada.

“His deportation will not affect the plans of the National Resistance Movement (NRM). Every revolution gets its leaders from the people and another shall rise to fill Miguna’s shoes.” Others who have been targeted include economist David Ndii, Peter Mathuki, Hamida Kibwana, Judy Sijeny, Mutakha Kangu, Oduor Ongwen and Koitamet ole Kina.

The State has also revoked firearm licences of key Opposition figures and cancelled the passports of a host of individuals thought to be Opposition-friendly. In the wide ranging interview, Raila also accused the Government of State capture. ALSO READ: Miguna: They must all pay for this “They have managed to get a stronghold on Parliament.

They have a history of intimidating the Judiciary and they have used and continue to use the country’s security apparatus to maintain the status quo. But the people have had enough of this,” he said. Raila has tried to be the president of Kenya four times. In his first bid for the presidency in the 1997 General Election, he finished third after Daniel Moi, who was the incumbent, and Democratic Party’s Mwai Kibaki.

Five years later, he was among the politicians who openly showed support for a Kibaki-led coalition that clinched power from the 24-year Moi presidency. But in 2007, after an acrimonious parting of ways with Kibaki, he had his second stab at the top seat, again falling short.

The results of those elections effectively plunged the country into anarchy. A similar script played out in 2013 and 2017, where official history records Raila as losing to President Uhuru Kenyatta on both occasions.

This track record has led foes to refer to him as a perennial loser unwilling to accept defeat. “I am not a mad man. We have evidence that none of the past two elections were won by President Kenyatta. The truth of the matter is that we have never had fair elections,” Raila said.

The National Super Alliance (NASA) chief’s office is located in Upper Hill, Nairobi. The air conditioning is set to a temperature significantly lower than the current heat wave in the rest of the city. His desk sits at one end, a brown, low-back, soft-leather sofa is on the other.

A bare coffee table and a TV cabinet complete the furnishings. Nestled between a copy of ‘India, The Spirit of Enterprise’ and ‘Architecture Lumiere – Light is Life’ is a copy of ‘The Kenya Air Force Story.’

“That is why they cannot intimidate me. I have stared them down before and I can do so again,” he said. “The country is under a bigger threat than that of Raila being charged with treason.” He said the NRM would continue to fight for justice, electoral reform and the Constitution.

Chasing shadows “If the Government doesn’t respect the law, then the people are under no obligation to do so,” he said. “NRM is not an organisation, it is an idea in the hearts and minds of the people. Matiang’i is and will continue chasing shadows.”

Interior Cabinet Secretary Fred Matiang’i declared NRM a criminal outfit and promised to make everyone involved in the Raila’s ‘swearing-in’ ceremony “regret they took part in the first place”. At 73 years, Raila says history is repeating itself and that the confrontations Kenya found itself dealing with soon after independence are playing out again.

“Uhuru must be getting advice from someone who advised his father because what we are seeing is a fight between the old order, supported the status quo, and the new order, people who are for the Constitution and positive change. Jubilee is attempting to turn back the clock and erase all the gains made by the new Constitution.”