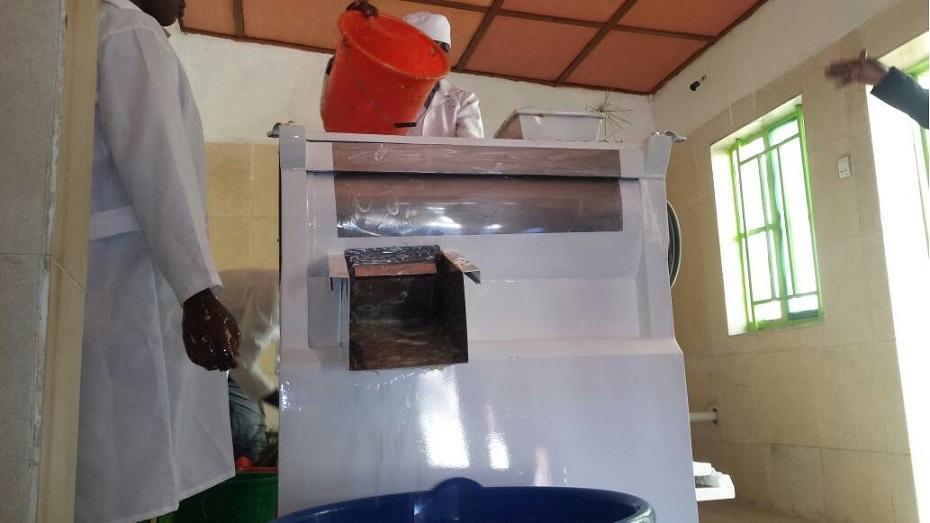 The 35 years old Kayandekwe Fils lives in Huye district in Southern Province. He invented a banana juice making machine. He claims that it performs quicker and in a cleaner way.

Kanyandekwe affirms that the machine can process not less than 12 tons of banana fruits and transform them into sweet and clean banana juice.

He said he got the knowledge that enabled him to make this revolutionary machine from Uganda.

The machine is also intended to process pineapple fruits into juice, among other exotic fruits.

Usually Rwandans living in countrywide use traditional means to process banana fruits into juice, some using hands while others use legs.

The machine uses four hours to get clean juice.

Kanyandekwe reported to Umuseke that he has created not less than six machines that he claims have contributed significantly to his economic upbringing.

He sold some the already manufactured machines to his clients and some of them are thankful to him.

One of them called Francine Nyirangirinshuti revealed that the machine has helped her reducing number of workers who normally came to help her processing banana fruits into juice.

Nyirangirinshuti said that she appreciate the fact that the machine played a key role in increasing quantity and quality of the banana juice that is transformed into the Inyamamare banana beer.

The reduction of time spent into the processing increased the time it took us to acquire needed quality to process into beer and sell it to our clients, she pointed out.

The innovator Kanyandekwe calls upon the youth to nurture the spirit of problem solving skills and this will provide them with jobs and will ease the burden they were meant to be in reverse circumstances.