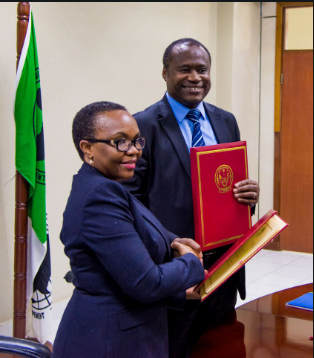 The Government has borrowed $269 million (Rwf237 billion) from the African Development Bank (AfDB) to invest in sustainable, affordable and reliable electricity services.

The loan agreement was signed on Tuesday. The concessional loan will be disbursed under the second phase of the Scale up Electricity Access Program (SEAPII), which is expected to increase on-grid access for households and productive usages, and increase off-grid access to renewable energy.

The Minister of Finance and Economic Planning, Dr Uzziel Ndagijimana, said the programme will boost the country’s efforts to achieve universal electricity access by 2024.

He said: “This project will be a key milestone in improving reliability of electricity supply, which will positively impact our economic growth, promote our private-sector-led job creating growth, particularly for the youth, and reduce poverty.”

The new loan is aligned to AfDB’s 10-year strategy (2013-2022) and current Country Strategy Paper for Rwanda.

It also comes to support three of the Bank’s High 5 priorities, which include the industrialisation of Africa and improving the quality of life for people on the continent.

“The Bank’s energy portfolio in Rwanda will increase from €158.95 million to €388.74 million, supporting eight operations, three of which are being implemented jointly with neighbouring states,” said Martha Phiri, the Bank’s Country Manager.

Phiri said she was very delighted to be signing the agreement.

“This is our single biggest operation in the country impacting on on-grid and off-grid power solutions. It seeks to ensure that Rwanda has reliable electricity in homes, health centres, businesses and everywhere else.”

She added; “Thanks to its strong record of performance and a results culture, Rwanda is the first country on the continent to pilot this project.”

The Bank, Phiri said, recognises electricity as a strong catalyst for inclusively and general economic growth.

The first SEAP project between Rwanda and the Bank worth $46 million (Approximately Rwf40.4 billion) was signed in 2013.

According to the Ministry of Finance, funds were used to upgrade two major distribution substations and also constructed 1,365 km of medium and low volt networks for on-grid access to 30,636 households, 32 health centres, 210 schools and 52 sector administrative facilities in six districts.

The initial project was implemented over a six-year period. As noted, the effective cost of each additional connection is $1,400.

By utilising REG’S in-house skills, and local contractors, and use of country systems, the SEAP II is expected to deliver, among others, 193,366 on-grid connections within three years at an average cost of around $900 per connection.

This, officials said, demonstrates the cost effectiveness of the RBF instrument and the reason it has become the instrument of choice for Government financing in various sectors including energy.