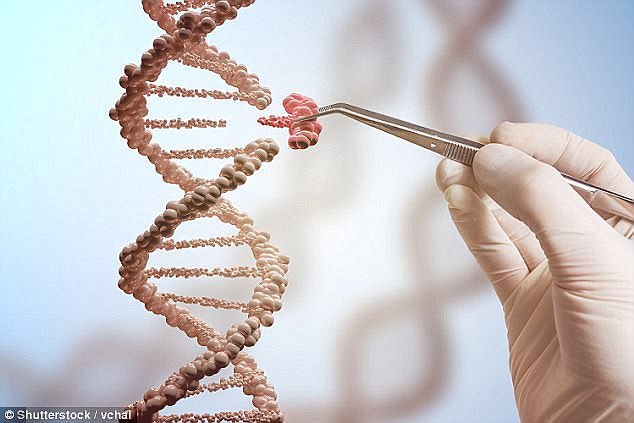 A former Nasa researcher says he wants to ‘help humans genetically modify themselves’ to create a new breed of superhumans. Dr Josiah Zayner, 36, made headlines last month when he became the first person known to have edited his own DNA.

The biochemist attempted to give himself super strength by removing a protein that inhibits muscle growth in his left arm, via an injection of DIY gene therapy.

In a new interview, Dr Zayner claims we are ‘slaves to the genomes we have’, and believes humanity will develop into a new breed of super-strong human thanks to widespread DIY genetic engineering.

Speaking the Guardian, Dr Zayner said: ‘I imagine people going to some place like a tattoo parlour, and instead of getting a tattoo they pick out some DNA that makes them muscly, or changes the colour of their hair or eyes.

‘DNA defines what a species is, and I imagine it wouldn’t be too long into the future when the human species almost becomes a new species because of these modifications.’

Despite warnings from the US Food and Drug Administration (FDA) that the sale of gene therapy products without regulatory approval is illegal, Dr Zayner sells basic genetic engineering kits online.

He is the founder and CEO of a genetic engineering company called The Odin.

Last year, he sold $200,000 worth of products, including a kit for yeast that can be used to brew glowing bioluminescent beer and a kit to discover antibiotics at home.

The California-based biochemist has published a free guide for people who want to take his introductory kits further and experiment on themselves.

Dr Zayner said: ‘We have always been slaves to the genomes we have, and giving people the ability to change that almost changes what it means to be human.

‘It seems so sci-fi and made up, but we’ve been genetically modifying humans with gene therapy since the 1990s – it’s just been very few people and for medical reasons. I want to help humans genetically modify themselves.’

The 36-year-old quit the programme to begin working on human genetic engineering technologies, and has since become a leading figure in the growing ‘biohacker’ movement.

The trend involves groups of scientists, engineers and activists experimenting with biotechnology, including editing human DNA to create ‘superhumans’.

Following his November DIY gene editing stunt, which the biochemist livestreamed online, Dr Zayner admitted he had not yet seen the effects of his experiment.

He told the Guardian that similar experiments with animals have only shown results after four to six months of treatment.

The 36-year-old’s gene therapy technique involved the use of Crispr-Cas9, a tool for making precise edits in DNA.

The technique involves a DNA cutting enzyme and a small tag which tells the enzyme where to cut.

By editing this tag, scientists can target the enzyme to specific regions of DNA and make precise cuts, which can be used to ‘silence’ genes by turning them off.

Dr Zayner said he expects that the DNA in some of his arm’s muscle cells will have changed following his experiment, but added he does not have the tests to confirm this.

He added he is ‘sceptical’ of the chances the size of his arm muscle will change.

Woman who swallowed over 1kg of cocaine held at Phuket airport