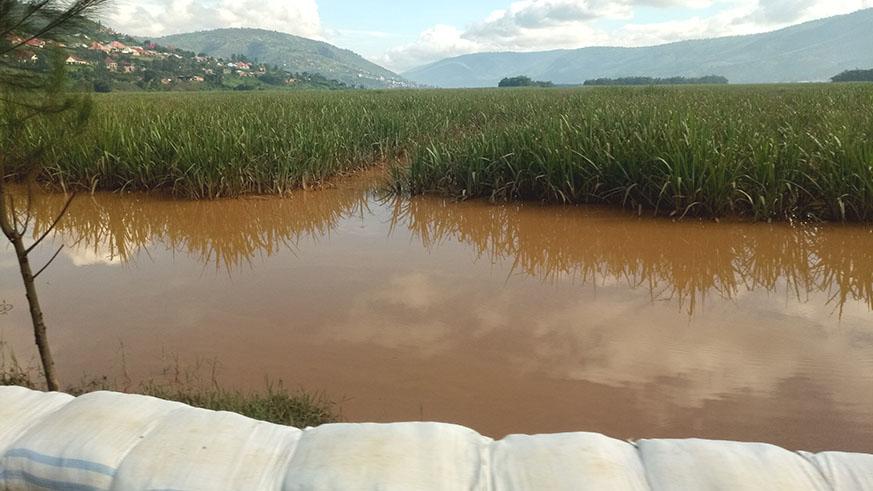 Farmers in various parts of the country are worried after the heavy rains that have ravaged the country for the past months, submerged crops on thousands of hectares.

With over 13,000 farmers, UCORIBU, a union of rice farmers’ co-operatives operating in Gisagara, Huye and Nyanza districts, had planted rice on 1,769 hectares in total, but, 612 hectares were destroyed by floods caused by heavy rains.

From the entire acreage, the union was projecting to harvest 4,826 tonnes, with an average produce of 4.2 tonnes per hectare.

But UCORIBU coordinator Jérôme Mbonirema told The New Times that farmers are grappling with rains and have started to feel its bitter effects.

He said they have so far lost 40 per cent of the produce they were expecting to get in this farming season.

“Some farmers had used bank loans to buy fertilisers so as to grow rice and have more yield; but, their entire plantations have been ravaged by floods. They will not get any harvest. So, how will they manage to repay the loan?” Mbonirema wondered.

“We request that banks restructure their loans to ensure interests do not accumulate, and allow farmers to pay back next season, after harvest. Also, there is need for support to farmers whose crops were washed away by rain to be able to farm again,” he said.

Telephone Ntirivinyuma, a farmer and father of six, from Karongi District, said “our crops have been uprooted and carried away by landslide and heavy rains. We are wondering how we are going to survive this disaster.”

Farmers requested for effective terracing and anti-erosion techniques as well as water management means to help address the issue.

The Ministry of Disaster Management and Refugees (MIDIMAR) says that from January to May 10, 2018 it recorded 4,973.5 hectares of crops damaged by heavy rain.

The Director of Disaster Response and Recovery at MIDIMAR, Philippe Habinshuti, told The New Times that they look for food to provide to people who are in need of food and might suffer from food insecurity because the food they had in their homes, or crops in their fields were destroyed by disasters.

Speaking on May 3, during a media briefing on a cabinet meeting’s decisions on the issue of disasters that have severely affected Rwandans, Fulgence Nsengiyumva, the State Minister for Agriculture, said that the crops destroyed by the heavy rains were worth about Rwf4 billion, adding that the Government will provide food relief and seeds to needy victims of heavy rains, at least until the end of July.

According to information from MINAGRI, the country always makes sure that there are at least 10,000 tonnes of maize stocks and 5,000 tonnes of beans in its national reserves put aside to assist people in case of food shortages due to disasters.

Figures from MIDMAR indicate that over 200 people from different parts of the country have been killed by the rains since January.

'Israel-Iran' fight flares up in Syria after Golan rocket attack