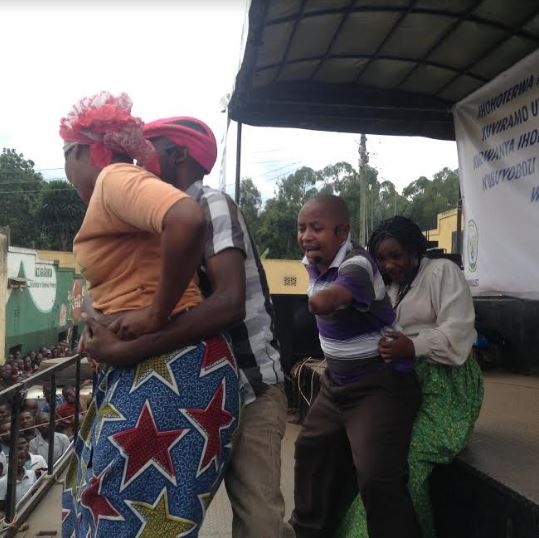 The residents from six sectors of Burera District, in the Northern Province of Rwanda admire the proximity of justice on their neighbohoods  and the way  Rwandan judicial system works during the events that  were organized in sector.They mostly enjoyed how the message of providing fair justice to citizens was conveyed to them throught  drama.

Mukashema Christine, a (MAJ) agent of Burera District [MAJ:Maîson d’Accès à la Justice); a judicial access based at a district level to offer legal assistance to the poor citizens, mainly those who reside in the countryside, cited that the use of theatres containing messages about their rights in relation to justice, teaches people more about the judicial system.

“Here in Burera, we usually have events prepared by The Ministry of Justice through RCN, dubbed ‘Justice Caravan’. it is an entertaining way with abundant message related to how people can learn more about the law, whether it is in the case of inherited properties or gender based violence.  All of these are  played in front of the citizens and they are immediately told how all can be solved through judicial means ” she said.

The Justice caravan ‘Umuriri w’ubutabera’ is known as a big truck that move to different identified locations, and the citizens of the area are invited to watch the theater, dancers, singers with the information on the rights of citizens and the functioning of Rwandan judicial system.

Uwambajemariya Florence, the Mayor of Burera District talking to Umuseke, said that using drama turned to be a good methodology of reaching  a big number of citizens as a way to acquire knowledge about their rights and being aware of judicial procedures provided by the law.

“Drama always mentions the real life we are living in; our daily life struggles. The Justice caravan has a great influence on how our citizens know their rights. We really appreciate how they plan the performance because it motivates people to attend, and around there are different officilias in legal issues that help locals get their legal related issues get solved.” She said

Justice caravan; is one of activities of ‘Strengthening Proximity of Justice in Rwanda’ project; implemented by RCN Justice et Democratie in partnership with the Ministry of Justice.

It is financed by the Sweden Embassy in Rwanda, aiming at attracting the attendance and attention of the local communities as to learn on how they can benefit from legal aid from abilitated organs.